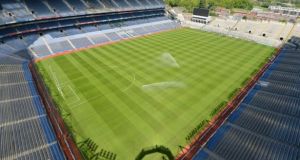 Four people who own properties near Croke Park are challenging the go-ahead for a proposed development of a new route to and from the stadium which they say will adversely affect their properties.

The four have told the High Court they are very concerned about the impact of the development on their properties at Ardilaun Square and Sackville Gardens.

They say they support regeneration of the area but contend the planning issues raised by the proposed development have not been properly assessed. Dublin City Council has wrongly abrogated responsibility for issues like road safety to the GAA, they claim.

Niall Handy BL, for the four, secured leave on Monday from Mr Justice Seamus Noonan to bring judicial review proceedings against the Council over the planned development, a local authority own development, in the area of Croke Villas, Ardilaun Square, Ardilaun Road, Sackville Avenue and Sackville Gardens.

It is part of the Council’s masterplan for redevelopment and regeneration of the area.

In the proceedings, the four want orders quashing the December 4th decision of the Council’s elected members approving the development, plus the November 2017 report of the Council’s chief executive recommending approval.

Mr Handy also applied for a stay on works related to the development but the judge directed the stay application be made on notice to the Council and returned it to February 20th.

Counsel said his clients are particularly concerned to get a stay preventing the planned opening up of the cul de sac that is Sackville Gardens, which has six late Victorian houses, so as to provide pedestrian and emergency vehicle access to Croke Park.

It is claimed Sackville Gardens, which faces the Ballybough railway line and Royal Canal, has a distinct character, historical significance and amenity, and is part of a designated conservation area.

The applicants say this would “completely transform” the character and residential amenity of an “otherwise sleepy cul de sac” by creating a major new pedestrian thoroughfare providing a key access route to and from the Cusack Stand, Hill 16, the GAA Museum and shop and an exit route from the Davin Stand.

The first two applicants are Kim Griffin, a part-time tutor, who lives at Ardilaun Square, Ballybough and Tony Henry, a landlord and property manager living at No 2 Sackville Gardens. He also owns No 3 and part owns No 4 Sackville Gardens, and manages the individually let properties within all three.