Residents of 100, 101 and 104 Seville Place in Dublin 1 have been ordered to immediately leave the three city-centre buildings due to fire safety concerns. Video: Colm Keena 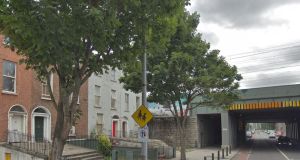 The orders were granted in respect of premises at 100, 101 and 104 Seville Place, Dublin, which the court heard are each divided into several flats or bedsits.

The orders were granted in respect of premises at 100, 101 and 104 Seville Place, Dublin, which the court heard are each divided into several flats or bedsits.

The council, represented in court by Conleth Bradley SC and Karen Denning Bl, says its fire safety officers had inspected the buildings in recent weeks.

The inspections revealed the three properties are in very poor repair and if a fire started in any of the buildings it would “spread very quickly”, Mr Bradley said.

The risk to persons living in the four-storey buildings is so serious that their continued use for residential purposes should be prohibited until several serious fire safety deficiencies are addressed, the council says.

The issues identified include that the bedsit doors were not fire doors, that emergency lighting was in disrepair, the internal lining of walls and ceilings were in serious disrepair, and the fire detection systems and alarms were faulty.

Fire detectors had been removed from common areas, escape routes had been obstructed, holes in the roof were poorly boarded up with combustible material, there were holes in the floor with wiring exposed.

Counsel said there was also evidence people had been smoking inside the building, and there was no fire-resisting barrier between the stairway and the bedsits/flats.

The council’s action is against Vincent and Catherine, otherwise known as Kathleen, Donoghue - who DCC says own the properties - and Stephen Tennant of Grant Thornton, who the court was told was appointed as receiver over the properties by AIB Mortgage Banks and AIB in October 2017.

The interim injunctions prohibiting the use of the buildings for residential purposes were granted, on an ex -parte basis, by Mr Justice Anthony Barr on Thursday afternoon.

The judge said he was satisfied to make the orders based on the fire safety concerns. The judge made the actions returnable to Monday’s sitting of the court.

Seeking the orders, Mr Bradley said that DCC’s case is that any fire in the buildings would spread quickly.

At least 40 people are living in the three buildings, including six children. There may be more people living there, counsel added.

Counsel said the Dublin Regional Homeless Executive had been made aware of the situation.

Mr Bradley said the council had serious fire safety concerns about the buildings which it inspected first in 2017 and then in 2018, when a fire safety notice was issued.

The council believed a maintenance company hired by the receiver had been carrying out necessary works on the buildings.

That inspection occurred after complaints were made to the council about the dumping of rubbish and rodents being observed around the premises.

It was also alleged that the carcass of a dead pig was brought into one of the buildings by people living in one of the units.

Counsel said inspections of the bedsits which DCC had gained access to revealed that they had no functioning hot water and that there issues with damp, and cockroach infestation.

Bars had also been placed on the windows of basement, which also prevent egress from the building in the event of a fire, he added.

1 Coronavirus: Public urged to stick with ‘tough’ restrictions to allow phase two proceed next week
2 Luke ‘Ming’ Flanagan bares his bottom half to European Parliament
3 Trump turns to bible for photo op as DC burns around him
4 Covid-19: Easing of restrictions ‘unlikely’ to be speeded-up
5 Journalists in firing line as Trump inflames US protests
Real news has value SUBSCRIBE