Counsel for five siblings says Anglo Irish Bank ‘not just a bad bank, it was the worst bank’ 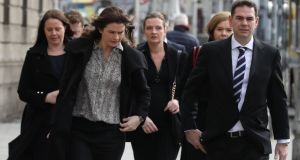 Seán Quinn’s five adult children unknowingly “put their heads in the noose” for a liability of more than €415 million – €83 million each – as a result of guarantees they signed concerning loans made by Anglo Irish Bank to Quinn companies, the High Court has been told.

Mr Quinn had gambled with his children’s property and future when companies in his group got €2.34 billion in loans from Anglo during 2007 and 2008 to fund margin calls on contracts for difference (CFD) positions held by Mr Quinn in the bank, Bernard Dunleavy SC said.

He said that from 2002 onwards the five children were, “on paper at least”, among the richest people in the country as they owned 95 companies in the Quinn group.

Counsel said the reality was that their father was in “total operational control”, ran the companies without reference to the children, and Anglo knew neither they nor anyone else in the Quinn companies could “refuse him”.

Mr Dunleavy said Anglo also knew the children had no knowledge of, and no independent legal advice about, the “disastrous” consequences of their signing securities and share pledges after Mr Quinn was forced to unwind the CFDs.

Mr Quinn’s problem was that he not only gambled on CFDs but, by investing almost exclusively in Anglo, chose to put all his eggs into one basket – “except they were not his eggs”. He had gambled with his children’s property, not his own.

Counsel said the children’s situation is unique in that hundreds of millions was being loaned by Anglo to “secretly support” its share price when no one had met with them or explained the transactions to them.

The children will raise issues including about signature-switching and being asked to sign only the execution page of a document without seeing the full document, he outlined.

He said multimillion-euro funding for one margin call was arranged on November 9th, 2007, the day of Ciara Quinn’s wedding. The children are now being pursued for some €83 million each under guarantees they would never have signed if the relevant documents were explained to them, he said.

They maintain they are not liable under the guarantees and share pledges on grounds of their father’s influence over them and the bank’s knowledge of that influence and its failure to act appropriately.

Anglo had “disguised” and “consistently misrepresented” the true purpose of the €2.34 billion loans and was well aware of all the factors that made the transactions unconscionable from the children’s viewpoint, counsel said.

“Anglo was not just a bad bank, it was the worst bank,” he added.

He said that at the time of the transactions, the children were employed at a low level in Quinn companies, earning about €25,000 annually and with no personal wealth beyond the shares they legally owned in the companies – shares already charged to Anglo.

Aoife, Brenda, Ciara, Colette and Seán Quinn Jnr were all in court on Tuesday.

In their proceedings before Mr Justice Garret Simons, the children contend the guarantees and share pledges are invalid and have no legal effect. The transactions arose out of a fall in the price of Anglo shares in 2007 when the bank advanced funds to Quinn companies to allow them meet CFD share commitments – agreement to exchange the difference between the current and future price of shares in Anglo.

The children signed security documents relating to the CFDs and say they did so without legal or financial advice and with no knowledge of the effects of those documents. When Anglo’s share price continued to drop in 2008, the bank demanded the Quinns reduce the CFD position, and most of the CFDs were unwound into shares. One portion of those was purchased by a group of investors known as the “Maple 10” and the rest by the Quinn Group.

The Quinn shares were transferred to six Quinn-owned Cypriot companies which ultimately received €498 million from Anglo.

The children’s core claim is the securities provided by them are invalid on grounds including undue influence, “unconscionable bargain”, negligence and breach of duty by the bank to them, especially to advise them. They also claim the bank’s conduct involved intentional infliction of economic harm on them.

They dispute IBRC’s claim that they have liability under guarantees for some €83 million each or under share pledges concerning their shareholdings in Quinn Group (ROI) Ltd.

IBRC previously obtained judgment for €120 million against their mother Patricia over securities provided by her. As she is bankrupt, she is no longer involved in the case. The children’s claims are denied.

1 Aer Lingus staff say they are living in ‘near poverty’ and unable to cover rent
2 Coronavirus: Warning of similar measures for other counties as Donegal moves to Level 3
3 Séamus Woulfe: The last man standing in Golfgate is set to learn his fate
4 Focus on cross-border movement as Donegal prepares for Level 3 restrictions
5 Australian man found guilty of murdering Irishwoman Ciara Glennon in 1997
Real news has value SUBSCRIBE