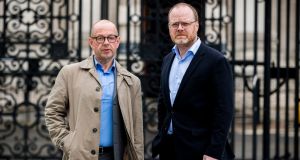 Police wrongly obtained warrants to carry out raids on the homes and offices of two Belfast journalists at a hearing which fell “woefully short” of fair standards, the High Court in Belfast has ruled.

Senior judges identified no grounds for the authorisation which led to the arrests of Trevor Birney and Barry McCaffrey.

Lord Chief Justice Sir Declan Morgan also stressed that the pair had at all times acted as investigative reporters adhering to their professional code.

“We see no overriding requirement in the public interest which could have justified an interference with the protection of journalistic sources in this case.”

The search permits were obtained as part of an investigation into the alleged theft of confidential documents from the Northern Ireland Police Ombudsman’s Office.

In August 2018, Mr Birney and Mr McCaffrey were detained, questioned and released in a case linked to a documentary film on the Loughinisland atrocity. Raids were also carried out at their residential and work premises during an operation undertaken by detectives from Durham Constabulary, supported by PSNI officers.

Computer equipment, files, phones, cameras and notebooks were all seized. The case was connected to the No Stone Unturned documentary, which examined the Royal Ulster Constabulary’s handling of the loyalist murders of six Catholic men at Loughinisland, Co Down in June 1994.

In May last year, the journalists won their challenge to the legality of warrants granted at an ex parte hearing.

Judges found that authorisation for the searches had been inappropriate, and that both Mr Birney and Mr McCaffrey acted in line with the National Union of Journalists’ code in protecting sources.

In court on Friday, detailed reasons were given for the decision reached. Sir Declan emphasised the need for fairness at the hearing to obtain warrants — especially where it involved a significant interruption with private and family lives.

“No matter how sensitively done, the unannounced arrival of several police vehicles and seven or eight uniformed officers exercising the power to enter and search one’s home while young children were wakening up preparing for school and guests were bemused to see their host being arrested constituted such an intrusion,” he said.

Claims that the journalists may have tried to dispose of material if served with advance notice were rejected.

The Lord Chief Justice also found nothing to back contentions that any publication could create a risk to the life of anyone named as suspects in the documentary. He pointed out that the journalists had acted responsibly, seeking a meeting with senior police to raise the issue of any risk, and also refraining from publishing the identity of an alleged informant.