A proposed cycling lane in Sandymount has caused "fear and loathing" among the community and has ended up in the High Court. Video: Enda O'Dowd 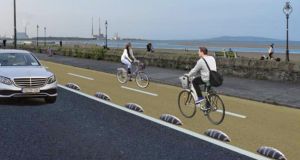 Dublin City Council has been ordered by the High Court to halt works on a new two-lane cycle way on Strand Road/Beach Road in Sandymount, Co Dublin.

Traffic on Strand Road was due to be reduced to one way from Monday to facilitate the opening of the route later in the month for a six month trial.

The council had opposed a stay sought on the works following a challenge brought earlier this week by a local resident and a councillor.

Mr Justice Charles Meenan ruled on Friday the risk of greater injustice lay in not granting a stay on the council’s works pending determination of the full challenge.

The judge adjourned the question of whether he should impose a stay on the work until the council had an opportunity to make its case.

On Friday the council urged him not to do so in submissions from its counsel Stephen Dodd SC. The reasons why it should go ahead had been set out in a lengthy affidavit from the head of technical services in the council’s transportation services, Brendan O’Brien, counsel said.

Among those reasons were that there had been a delay by the applicants in bringing the proceedings even though it was publicly announced work was to commence on February 15th.

In a survey, the council said it was strongly supported by 56 per cent of people in the area with 23 percent opposing and 17 per cent having concerns, counsel said.

It had been emphasised this was a trial for six months and there have been cases where trials did not work they were removed. The works were covered and encouraged under government policy for essential transport infrastructure works during the pandemic and did not require to go through any of the planning processes.

The applicants had produced no evidence of any possible environmental damage which they claimed necessitated assessments under EU law, it was argued.

Monday’s start date was important in terms of the imminent return of children to school in an area with four primary and seven secondary schools and the advice being that they should walk or cycle, counsel said.

A stay would also mean the council will incur financial penalties because arrangements have been put in place for Monday’s start, including 25 traffic management personnel being employed to monitor the situation.

Neil Steen SC, for the applicants, rejected the council’s arguments arguing, among other things, the council’s own statistics had indicated serious traffic congestion when the cycleway is up and running in normal times. He also said the council’s claim that it was strongly supported was irrelevant because this was a legal process, not a popularity contest.

Mr Justice Meenan said there were well established legal principles in relation to a stay and the question of “greater injustice”.

The court had been satisfied the applicants had sufficient interest in the matter to bring the challenge and that there were substantial grounds for doing so.

There was no doubt what was being envisaged is a considerable change in traffic movement which will significantly alter traffic patterns and the way in which people in the area order their transport needs, he said.

The council said it was a trial and that only minimal works would be required which meant that these measures could be put in place at any time without any particular difficulty, he said. He also did not think the challenge to the works came “like a bolt out of the blue” for the council.

The balance of justice lay in favour of the stay being granted. However, he hoped he could give an early hearing of the main proceedings when they return to the court in April.

In their judicial review proceedings Mr Carvill, of the Serpentine Avenue, Tritonville and Claremont Roads group, and Mr Flynn are seeking declarations that the council’s plans are “unlawful” and in breach of European Union environmental directives.

Last Friday Mr Flynn applied to An Bord Pleanála for a declaration that the city council requires planning permission for the cycle path.

The application to An Bord Pleanála maintains that the two-way cycle track would be less Covid-compliant than the existing system where cyclists travel on the opposite side of the road to each other as part of general traffic.

The two-way track would mean cyclists were only one metre apart, the submission, made by Farry Town Planning Ltd on behalf of Mr Flynn states. “This would in our opinion facilitate the transmission of air-borne droplets to a greater degree than exists under the present layout,” it said.

“We believe that this proposal would increase transmission rates.”

The submission also noted that the cyclists in computer generated image of the track “are not wearing a face covering of any description”.

While the council maintains the cycle path is being implemented as a Covid-19 mobility measure, Mr Flynn’s submission states “it is our opinion that the proposed development, although presented as a response to Covid-19, actually forms part of a wider network”. It also references “dubious links between this project and the Covid-19 pandemic”.

The submission claims the environmental implications of the removal of the traffic lane had not been adequately assessed and it says it does not accept the council intends to project to be a temporary measure.

“In the absence of concrete and reliable proposals which would ensure that the project would crease after the initial test period, it would be safe to assume that this arrangement will become permanent.”

The council has maintained the cycle path is exempt from requiring planning permission. The project was in line with Government advice to implement walking and cycling schemes during the Covid-19 pandemic, it said.

The council had engaged independent consultants who confirmed there was no requirement for environmental assessments which could trigger an application to An Bord Pleanála, it said.