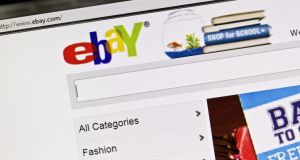 A mother has secured a High Court order aimed at stopping images of her toddler daughter in a Halloween costume being used on eBay.

The child’s mother, a nurse, had posted pictures of her daughter to her online Instagram account on October 30th 2018.

Almost a year later, a close friend alerted her the image had been used by Amazon and eBay.

In an affidavit to the court, the nurse, who took proceedings on behalf of her daughter, said she did not give permission to anyone to use, distribute, sell or copy these images.

On October 13th last, she found out from a close friend the image of her daughter was being used on eBay and also on Amazon, she said.

She said she contacted both companies who assured her they would investigate the matter and revert . Amazon contacted her to reassure her it had taken the complaint seriously and was actively investigating it, she said.

Amazon in January this year confirmed it had investigated the matter and had removed all images of the child found on product pages, she said. It also said sellers had been identified by its investigations team and appropriate actions had been taken on those accounts.

John Temple BL, for the child, told the High Court Amazon had a very proactive approach but eBay had a “very different” approach which was that the onus was on the parents of the child to monitor for the image use and apply to have images removed.

Counsel said the mother phoned eBay on November 4th, 2019 and was directed to file her complaint online. Two days later eBay asked to provide her email address to the person using her daughter’s image and she said she did not want this to happen.

Counsel said the mother then engaged a solicitor and eBay, along with Amazon, was asked on January 7th last to immediately cease and desist controlling and further processing any image of the girl.

Counsel said eBay informed the mother the listing on its website had been removed, and said it had passed on personal details to the user who had used the photos.

At the end of January, eBay told the mother’s solicitor it had already dealt with the issue of the image on the one identified page and could only take action against a listing if it is identified on a notice of claimed infringement form. Earlier this month eBay was informed by the solicitor the girl’s image was still being used by a number of sellers via its website and a request to remove the images was made.

Mr Justice Eagar said he would grant an interim injunction against eBay otherwise known as eBay Europe Services Ltd from processing, reproducing or using the child’s image. The case will come back before the court on June 16th.

Coronavirus: Kenmare Mart to reopen for first sale in almost three months 17:37
Over half of Northern Ireland’s Covid-19 fatalities are care home residents 16:53
Robbie Lawlor ‘met by a gunman’ when he attended Belfast appointment 16:50
Outdoor children’s playgrounds set to reopen from Monday 16:38
Man alleged to have interfered with Co Westmeath heritage area 16:07