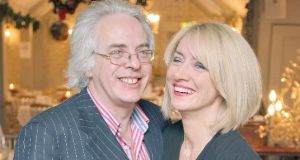 Anyone thinking that the €2.9 million debt write-off approved for former RTÉ celebrities Theresa Lowe and Frank McNamara is only for high-profile applicants should think again.

The couple’s protracted efforts to find a solution to their long-running financial difficulties came as a result of the State’s personal insolvency system that can help anyone, regardless of income level, social standing or how they found themselves in financial difficulty in the first place.

In fact, personal insolvency arrangements - the legal mechanism used by the barrister-presenter and musical director-composer to write down their debts, retain their family home and return to economic activity with sustainable overheads - are being approved at a rate of about 100 a month.

There were 1,055 personal insolvency arrangements approved in 2019, an increase of 10 per cent on the previous year’s figure, according to the Insolvency Service of Ireland. The statistics show that more and more people are turning to this debt write-off mechanism to secure a fresh financial start.

“These cases are being approved every day of the week for the average household who go out to work every day, have children in university and have the same day-to-day problems that everyone has. It is not just limited to the rich and famous,” said James Green of McCambridge Duffy, the personal insolvency adviser who devised the debt plan for McNamara and Lowe.

The High Court’s approval of the couple’s restructuring plan on Monday formally signs off a deal that was agreed in principle last August with some minor details to be ironed out.

The couple were carrying debts totalling €3.7 million, the bulk of that (almost €2.3 million) due to Tanager, the investment fund owned by US private equity giant Apollo and one of the firms branded as “vulture funds” by debtor advocates who are critical of their aggressive behaviour.

Much of the debt stems from remortgaging properties by the couple who tried to get through short-term financial difficulties as a result of Mr McNamara’s musical royalty income drying up.

The couple will walk away owing €420,000 on a new mortgage that is more sustainable on their Co Meath home estimated to be worth €550,000. The deal is not without a cost of the couple - far from it; Mr McNamara is paying a large lump sum to his creditors from his late father’s estate.

Ultimately, the deciding factor in whether a debt write-off in a personal insolvency arrangement should be approved - either by creditors informally outside the court process or formally by judges in an appeal inside it - is whether it is better outcome for all the parties than bankruptcy.

In the McNamara-Lowe case, the judge found that it was: about five cent in the euro better for Tanager, a fund that raised objections that delayed a final outcome for more than three years.

Mr Justice Denis McDonald noted in his judgment in the case that the 2012 and 2015 pieces of legislation establishing the personal insolvency arrangements envisaged the process lasting only a matter of months but this case had taken “an unusually long time to be finalised”.

In another significant case on Monday, Mr Justice McDonald said the court could not approve “debt for equity swaps” - another tool to help struggling borrowers who cannot repay mortgages - and he suggested changes be made to legislation introducing new debt resolution solutions in sufficient detail to help all parties “understand the precise scope and boundaries” of the solutions.

There is no fresh legal precedent set by the McNamara-Lowe case but if any benefit can come from high-profile litigants such as in this case, it will be from highlighting the value of the insolvency regime to individuals with the dark clouds of debt hanging over them.

It is another case that will help prove the merits of approving these kinds of deals more quickly for all debtors.

“This is a juicy case because it has two people who used to work for RTÉ and are familiar in every sitting room in the country and who had debts running into the millions,” said Mitchell O’Brien, the Dungarvan-based personal insolvency practitioner who helps struggling debtors.

“The exact same maths apply for an ordinary mom and pop case with a number of kids in a semi-D in any town in the country.”