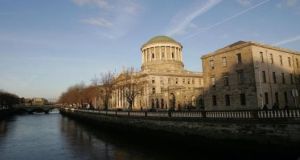 In an affidavit, the residents say the future housing estate is a hazard and danger to the occupants of Griffin Rath Hall.

A number of residents fear their homes in Maynooth, Co Kildare, are at risk from flooding because a new housing estate next to them is being built up to 0.8 metres higher than it should be, it has been claimed in High Court proceedings.

The residents of Griffin Rath Hall, Maynooth,also say their homes will be overlooked and their privacy affected by the 174-home development at Greenfield.

Kelston Properties got planning permission for the development in 2016 and for subsequent revisions.

On Monday, Mr Justice Charles Meenan adjourned the case to later this week after he was told lawyers had just come on record for the respondents.

In an affidavit on behalf of the residents, Martin McMahon says large parts of the development are completed or very close to completion. Despite numerous requests, the respondents have failed to comply with the terms of the planning permission and do not intend to fully do so, he says.

The future housing estate is a hazard and danger to the occupants of Griffin Rath Hall and to the nine residents in particular, he says.

Mr McMahon says Greenfield is a floodplain and the new higher levels of the development, and raised floor heights, will require Kelston to prepare a new flooding report.

Their own planning consultant says the difference in height between the Greenfield homes and Griffin Rath Hall homes is between 0.7m and 0.8m.

The residents fear the unauthorised higher levels of the development could create a flood risk to their homes, he says.