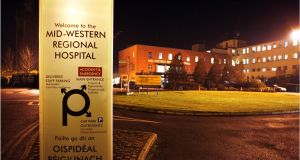 The operation at the Mid-Western Regional Hospital in Limerick to remove Kevin McMahon’s voice box in January 2011 was “completely over the top and too radical”. File photograph: Dara Mac Dónaill/The Irish Times

A man who lost the ability to speak naturally after his voice box was unnecessarily removed during a 14-hour operation at the Mid-Western Regional Hospital in Limerick has sued the HSE for damages.

Kevin McMahon can only speak through an artificial voice box, the High Court heard.

When Mr McMahon first went to the hospital in 2010, he had a throat lesion which was in the first level of cancer and targeted radiotherapy would have cured him, his counsel Liam Reidy SC said. The operation to remove Mr McMahon’s voice box in January 2011 was “completely over the top and too radical”.

His side’s medical experts would say the cancer, which by January 2011 had reached the third level, could have been treated with a combination of chemotherapy and radiotherapy, Mr Reidy added. The experts would also say the operation was totally inappropriate and caused significant damage and distress.

Mr McMahon (63), Glasgow Park, Roxboro Road, Limerick, sued the HSE over his diagnosis, treatment, management and care, particularly in relation to the operation.

He alleged failure to discuss the treatment options available before carrying out radical head and neck surgery when, he claimed, it was unreasonable to do so. It was further claimed it was unreasonable and inappropriate to treat him with radical surgery.

He also sued over a three-month delay in carrying out a second biopsy of his vocal cord which was ordered by a surgeon. The second biopsy was supposed to be carried out in October 2010 but was cancelled and rescheduled for January 2011.

Mr Justice Kevin Cross was told liability had been admitted this week and the case was before the court for assessment of damages only.

Opening the case, Mr Reidy, instructed by Holmes O’Malley Sexton Solicitors, said the HSE had in a letter on Tuesday last said liability was no longer an issue in the case.

No apology had been offered to Mr McMahon, counsel said.

Before these events, his client was the head of a house “full of joy and laughter” where his four children and grandchildren gathered at meal times.

Mr McMahon went to his GP in 2010 when he noticed his voice had become hoarse, counsel said. He was referred to the Mid-Western Regional Hospital where he was found to have a lesion on the left side of his vocal cord considered to be suspicious of an early cell carcinoma.

He was admitted to the hospital on July 12th, 2010, for a biopsy and the reporting histopathologist advised a urgent second biopsy should take place.

Counsel said the second biopsy was scheduled for October 2010 and his side’s experts would say the delay of three months in carrying it out was “utterly unacceptable and indefensible”.