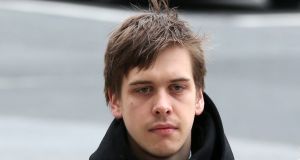 Magnus Meyer Hustveit (25), arrives at the Court of Appeal in Dublin this morning. Today he was jailed for 15 months. Photograph: Collins Courts.

A Norwegian man who was given a wholly suspended sentence for raping his girlfriend multiple times while she slept has been resentenced to 15 months imprisonment following a finding by the Court of Appeal that his original term was “unduly lenient”.

Magnus Meyer Hustveit (26), had pleaded guilty at the Central Criminal Court to one count of rape and one count of sexual assault committed against his 28-year-old girlfriend between 2011 and 2012.

He was given a wholly suspended seven year sentence by Mr Justice Patrick McCarthy on July 13th 2015.

Hustveit, whose former partner waived her right to anonymity so that his identity could be published, returned to his native Norway after sentencing.

The Director of Public Prosecutions successfully sought a review of Hustveit’s sentence on Tuesday on grounds that it was “unduly lenient”.

Giving judgment, Mr Justice George Birmingham said the victim had woken to find herself covered in sperm with no knowledge of having engaged in any sexual activity. A few days later she awoke to find she had been penetrated but again was unclear how.

Mr Justice Birmingham said it was not in dispute that this was an unusual case and “indeed an exceptional one”.

Much of the offending behaviour occurred without the victim’s knowledge and all of the offending was only known because of detailed admissions made by Hustviet in an email he sent to the victim following her request to find out what had happened to her.

Mr Justice Birmingham said the combination of a number of factors – Hustveit’s cooperation, his voluntary return to Ireland to be charged, his previous good character, the positive life he was now leading in Norway – justified and required a sentence that would be appreciably less than would be normal in cases of multiple rapes.

However, Mr Justice Birmingham said the court could not agree that the case was wholly exceptional as to warrant entirely non-custodial disposal and the sentencing judge “erred” in this regard.

Mr Justice Birmingham said the court was required to resentence someone who had been told he would not be serving time in jail, had returned to his native homeland and had then been told that his sentence was facing a review.

It had long been recognised, the judge said, that taking away from someone a chance they had been given must be particulary burdensome and difficult.

It had been confirmed that Norway did not extradite its own citizens and considerable significance could be attached to the fact that Hustveit had returned voluntarily to face the review.

Mr Justice Birmingham said it would not have been possible for the lower court to require Hustveit to serve less than two-and-a-half years but now, at this stage, he would be required by the Court of Appeal to serve “half of that two-and-a-half year sentence”.

Mr Justice Birmingham, who sat with Mr Justice Alan Mahon and Mr Justice John Edwards, said the original seven year sentence would remain and all but 15 months of it would be suspended.

Hustveit made no reaction to the court’s decision when it was read out.

He was told once again that he will be on the sex offenders register and there were certain implications he would be required to abide by.

He was required to enter into a good behaviour bond for seven years. When asked if he undertook to be so bound, Hustveit said “I do”.

His victim Niamh Ní­ Domhnaill was present in court with a number of friends and supporters.

However, counsel for Hustveit, Caroline Biggs SC, objected on the basis that it contained references to memory loss, hearing loss, seizures and blackouts but her side had not been provided with medical reports to “substantiate these assertions”.

Mr Justice Birmingham said it would be extremely unusual for the Court of Appeal to hear evidence as it was a “review court” and appeal court ordinarily operation on transcripts and documents.

He said the defence’s contentions about being unable to probe the assertions contained in the updated victim impact report was “not without substance”.