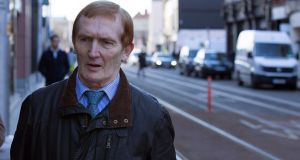 A man has lost his appeal over the rejection of his claim he was assaulted and defamed by a security guard as he tried to board a packed Luas in Dublin city centre.

Brendan Marshall is “manifestly mild-mannered” and was “very polite” in evidence but, whatever happened at the time of the incident at the Jervis Street platform, “his dander was up” and CCTV showed him behaving in an aggressive manner, Mr Justice Paul Coffey said.

The footage did not assist the court as to whether anything happened before security guard Conor Finnegan activated his personal body camera, he added.

At the High Court on Tuesday, the judge dismissed the appeal by Mr Marshallover the Circuit Court’s rejection of his €75,000 damages claim against Luas operator Transdev Ireland and STT Risk Management, for whom Mr Finnegan worked at the time, August 5th 2014.

He refused a costs application by Finbarr Fox SC, for the defence, meaning both sides must pay their own costs in both courts.

Mr Marshall, (70), who is also a security guard, of Rossfield Crescent, Brookfield, Tallaght, had claimed he was restrained by Mr Finnegan and another security guard while trying to board a packed tram about 6pm at Jervis Street, having “kindly requested” people to move up.

He alleged assault in that Mr Finnegan had put his hand on his shoulder. Mr Finnegan denied assault and said he brushed up against Mr Marshall at the door of the tram when he went to investigate alleged “aggressive” shouting at passengers.

He said he activated his personal body camera when Mr Marshall alleged assault, advised him the incident was being filmed and asked him to step off the tram to discuss the assault allegation.

An exchange between the two men, during which Mr Finnegan queried whether Mr Marshall had a ticket to travel on the Luas, lead to Mr Marshall showing his public service card and saying: “It’s an old age pass, you f**king dope”, the judge noted.

Mr Marshall agreed in evidence he should not have said that, adding he was “annoyed and frustrated with how I was treated”.

During cross-examination, Mr Fox, with Eamonn Marray BL, instructed by Hayes McGrath Solicitors, put to him he had brought perhaps four other legal cases, including two involving the Luas, and was in court to try and get money. “No”, Mr Marshall replied.

In his ruling, the judge said it was an “unfortunate” case and he was not satisfied the allegation of assault was substantiated or that Mr Marshall was defamed by the exchange with Mr Finnegan over whether he had a valid travel pass.

Mr Marshall was asked in a “very polite” fashion by Mr Finnegan to produce evidence of his entitlement to travel on the Luas and the latter replied that was “nothing to do with you”.

After exchanges, Mr Marshall produced his public services card. It seemed Mr Finnegan initially did not appreciate that the card entitled Mr Marshall to travel free.

The defamation claim arose insofar as there was a refusal to allow Mr Marshall travel but, from the footage, the court was “struck by the profound disinterest” with which people on the platform viewed these matters.

He was not satisfied there was publication necessary to ground a defamation claim, “if indeed Mr Marshall was defamed at all”. It seemed, on a true interpretation, the exchange was a “misunderstanding”.