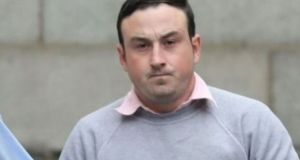 Aaron Brady who was found guilty of the murder of Detective Garda Adrian Donohoe. Photograph: Collins

A key witness failed to give evidence in the trial of Aaron Brady for the murder of Det Garda Adrian Donohoe after receiving threats “backed by criminal or paramilitary elements”, a High Court judge has heard.

Passing sentence on father-of-two Colin Hoey on Tuesday, Mr Justice Michael White said he was “sure the vast majority of the decent people from south Armagh” were “sick and tired of criminals” invoking “the green flag” and intimidating witnesses.

The judge jailed Mr Hoey (30) for 21 days and fined him €2,000 for contempt of court. Mr Hoey, with an address at O’Neill Estate, Cregganduff, Co Armagh, pleaded guilty to the charge after failing to appear to answer a witness order during the trial of Aaron Brady.

Mr Hoey had initially provided an alibi for Aaron Brady but later retracted it.

Mr Justice White said on Tuesday that failing to attend court on foot of a witness order was “a serious matter” but Mr Hoey was “most unfortunate” to become involved with Brady, who had been convicted of the most serious crime known to the Irish criminal law.

The judge noted Mr Hoey was a “very decent young man” from a “very decent family” who had been caught up in a “very difficult situation” and resided with his friend Brady “in a nest of vipers”.

He stressed that failing to answer a witness order was “unacceptable behaviour” and said it is very important that “good people” stand up and respect the rule of law and civility of the Constitution.

A bench warrant was issued for Mr Hoey by trial judge Mr Justice White on March 5th this year after he failed to appear at the Central Criminal Court to answer a witness order during the trial of Brady. Mr Hoey was arrested by gardaí on October 5th after presenting himself at the Criminal Courts of Justice. The High Court has heard that the offence is punishable by imprisonment, fine or both.

Aaron Brady was found guilty of the murder of Det Gda Adrian Donohoe by an 11-to-one majority jury verdict at the Central Criminal Court on August 11th. Last month, the 29-year-old with a last address at New Road, Crossmaglen, Co Armagh was sentenced to the mandatory term for murder of life imprisonment with a minimum time served of 40 years. Brady was also sentenced to 14 years for the robbery of €7,000 – a sentence that will run concurrently with the life sentence – at Lordship Credit Union in Bellurgan, Co Louth on January 25th, 2013.

During hearings at Brady’s trial, Det Inspector Mark Phillips of the National Bureau of Criminal Investigation said that Mr Hoey was a witness of “some significance” who had provided an alibi for Aaron Brady but had later withdrawn that alibi.

At Tuesday’s contempt hearing in the High Court, Remy Farrell SC for Mr Hoey, told Mr Justice White that the charge of contempt against his client was admitted.

Brendan Grehan SC, on behalf of the Director of Public Prosecutions (DPP), said contempt is neither a summary or indictable offence and the High Court has unlimited jurisdiction in accordance with the principle of proportionality to assess the charge.

Taking the witness stand, Det Insp Phillips told Mr Grehan that Brady’s trial had commenced in late January of this year and witness orders had been directed by the court in respect of witnesses set out in the book of evidence, which included Mr Hoey.

Det Insp Phillips agreed with counsel that Sgt Paul Gill had given evidence of serving a witness order on the accused man on March 5th for his attendance at the trial.

Mr Grehan said Det Padraic O’Reilly previously gave evidence of calling to Mr Hoey’s home on March 3rd and advising him that he was required to attend at the Central Criminal Court on the following day. Mr Hoey indicated that he wanted to speak with his solicitor but was advised by the detective that a warrant would be issued if he did not attend, said the barrister.

Det Insp Phillips told Mr Grehan that Mr Hoey did not attend court on March 4th and a warrant was issued for his arrest the following day.

However, solicitor Danny McNamee, for Mr Hoey, made contact with gardaí in early October and informed them that his client wished to present himself for the execution of the warrant. Mr Hoey presented himself at the Criminal Courts of Justice on October 5th and the warrant was executed. Following this, Hoey was granted legal aid and released on bail, said Mr Grehan.

Det Insp Phillips agreed Mr Hoey had “significant evidence” to give at Brady’s trial if he had attended.

Under cross-examination by Mr Farrell, representing Mr Hoey, Det Insp Phillips agreed his client had made a statement to gardaí around seven weeks after the shooting of Det Gda Adrian Donohoe in which he said that Brady had arrived at his house on the evening of January 25th, 2013. There was a suggestion that Brady and Mr Hoey had watched a film together and Brady had stayed in the house for a period of time, said Mr Farrell.

The lawyer said that Brady and Mr Hoey had been friends since third class in primary school and both men were living in the same house at the time. Mr Hoey and his family come from the Crossmaglen area, which is the same area that the Brady family reside in, said Mr Farrell.

Det Insp Phillips agreed that Brady had been convicted of the most serious offence on the criminal calendar. Mr Farrell said his client made a second statement to gardaí on September 12th, 2017 concerning the events of January 25th, 2013 and Mr Hoey was invited to reflect on the accuracy of what was in his initial statement.

The detective agreed with counsel that the second statement, where Mr Hoey had withdrawn the content of his first statement, was brief. In the second statement, Mr Hoey said the events recited may well have occurred but they had probably taken place on the day prior to January 25th. Mr Hoey also told gardaí that this had been on his mind for some time, the court heard.

The detective further agreed that Mr Hoey attending the Garda station for a second time was akin to him “facing up to things” and a significant statement for the prosecution in the trial.

Mr Farrell put it to the witness that whatever was said had certainly caused Mr Hoey and his family to take the view that these were “implicit threats” backed by criminal or paramilitary elements. “I’m not party to the conversation that took place but ultimately he did not appear to give evidence,” replied Det Insp Phillips.

The barrister put it to the detective that Mr Hoey and his family had taken “a meaning or a view” from what was said. “I can understand that happening,” replied the witness.

The witness agreed Mr Hoey is a “fairly industrious” man and currently works as a labourer for an electricians’ firm. Mr Farrell said the accused has a long term partner, is the father of two children and has a significant level of community involvement in the local GAA club.

In re-examination, Mr Grehan said perhaps some kind of pressure had “been brought to bear” on Mr Hoey and asked the witness if complaints had been made to gardaí about this. “No,” replied Det Insp Phillips.

The detective agreed with Mr Grehan that quite a number of people in various communities from North and South of the Border had come to court to give evidence in the trial and done their civil duty despite being under pressure at the time.

In his submissions, Mr Farrell handed a report into the court from Mr Hoey’s counsellor, which the barrister said painted a picture of a young man who was under considerable pressure in and about the relevant time.

Mr Farrell submitted to the court that whether any complaint had been made by Mr Hoey to gardaí in terms of pressure, it was hard to see how gardaí would have had jurisdiction to deal with it as it could have been said to Mr Hoey on the other side of the Border.

The lawyer said the most relevant factor in any case of this nature is motivation and why someone chooses to disobey a court order. “I’m instructed by Mr Hoey that he is deeply sorry for what he did, he found himself in a particular situation and made a decision,” said Mr Farrell.

In summary, Mr Grehan told the court that an entire trial could “be set at nought” if witnesses failed to attend court to give evidence.

Passing sentence, Mr Justice White said that Mr Hoey’s second statement to gardaí was significant in relation to the fact at issue that the jury in the Brady trial had to determine. He said failing to attend court on foot of a witness order was a serious matter.

Mr Justice White said he accepted what Mr Farrell had put to the detective and explained he had to read quite detailed intelligence during the trial as part of his duties as trial judge.

Addressing the parties, Mr Justice White said he was very reluctant to impose any form of sentence on Mr Hoey as he is “a very decent human being”. However, the judge said the court had to be mindful of its duty and therefore must impose a short custodial sentence on Mr Hoey to mark the seriousness of the matter.

He sentenced the defendant to 21 days in prison and fined him €2,000 for contempt of court.