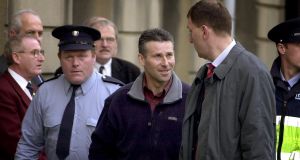 After a legal battle lasting nearly 12 years the High Court will order the extradition of Liam Campbell, who was found civilly liable for the Omagh bombing, to Lithuania where he is wanted on international weapons trafficking charges.

Campbell (58) was arrested in Upper Faughart, Dundalk, Co Louth on December 2, 2016, on foot of the second European Arrest Warrant (EAW) issued by Lithuanian authorities to be endorsed by the High Court here. It was the third attempt overall by Lithuania to seek Campbell’s surrender.

Campbell’s legal team had objected to his surrender based on the length of time he had been subject to the warrant and had argued that he could be subjected to “inhuman or degrading treatment” in prison there.

Remy Farrell SC, for Campbell, said that the Lithuanian authorities were “culpable, with a capital C” over the delay, which amounted to an “abuse of process”, and that they had been seeking his client’s extradition for over ten years.

Mr Farrell added that the remand prison of Lukiskes, in Vilnius, had closed in July of last year, that his client’s bail was “hanging over him for four years” and that the delay in proceedings was “shameful”.

In a judgement returned on Friday afternoon, Ms Justice Aileen Donnelly said she was satisfied that an order for the surrender of Campbell may be made.

As the judgement was delivered electronically, Ms Justice Donnelly said she would formally make the order when Campbell next appears in person before the High Court on July 13th.

In 2017, Campbell’s legal team had raised concerns about prison conditions in Lithuania, while he had also objected to his surrender on the grounds that it was “an abuse of process”. Campbell had previously spent four years in custody in Northern Ireland during a second attempt to extradite him and was released when he succeeded in his objection that to do so would be a breach of his rights.

Campbell was to be incarcerated at Lukiskes prison, which had been held by the High Court in the past to have been in breach of the Convention of Human Rights.

In her judgement, Ms Justice Donnelly said that “virtually the entire legal argument prior to the hearing on 9 June, 2020, concerned Lukiskes prison, the conditions there and the undertakings that have been given by the Lithuanian authorities in respect of same.

“The position now is that Lukiskes prison has closed. I am satisfied that the point as regards prison conditions has no merit at this stage of the proceedings.

“There is simply no other evidence that demonstrates that there is a real risk that this respondent [Campbell] will be subjected to inhuman and degrading prison conditions.

“The respondent’s own expert had no issue with the conditions in Kaunas Remand prison, which was the alternative prison,” she said.

The EAW had sought Campbell to prosecute him on three offences: preparation of a crime, illegal possession of firearms and terrorism. The maximum sentence for the offence of terrorism is 20 years.

The warrant alleges that Campbell “made arrangements, while acting in an organised terrorist group, the Real Irish Republican Army (RIRA) to acquire a substantial number of firearms and explosives from Lithuania and smuggle them into Ireland”.

It further alleges that during the end of 2006 to 2007 Campbell “made arrangements with Seamus McGreevy, Michael Campbell (his brother), Brendan McGuigan and other unidentified persons to travel to Lithuania for the purposes of acquiring firearms and explosives, including, automatic rifles, sniper guns, projectors, detonators, timers and trotyl [TNT]”.

It is also alleged that in 2007 Campbell held conspiracy meetings regarding the planning of logistics for the operation and supplied money for the purchase of the weapons.

Addressing the delay in proceedings, Ms Justice Donnelly said: “It must be said that Lithuania is not entirely to blame for the periods at stake. In the first place, the criminal offences were not complete until 2008 and it is difficult to see how time can be said to run against Lithuania - a period of 12 years. Allowing for investigation and internal decision-making with respect to proceedings, the [first] EAW was issued reasonably promptly against him - within 12 months from January 2008”.

Lithuanian authorities had given an assurance that Campbell would not be held in Lukiskes prison but the respondent objected to the assurance.

“Lithuania were within their rights to issue the assurance and there can be no blame on them. It would not be appropriate to fix Lithuania with any responsibility for delaying human rights protections ... I do not accept that it is mala fides [bad faith] for a judicial authority to seek surrender when prisons may subsequently be found to be defective,” said Ms Justice Donnelly, who noted that not all Lithuanian prisons were deemed to violate human rights due to conditions.

Ms Justice Donnelly said she did not think Lithuania were engaging in a breach of process.

The High Court previously heard that an issue had arisen over the independence, or otherwise, of the Lithuanian public prosecutor and this issue was referred to the European courts by the Supreme Court.

In May 2019, the Court of Justice of the European Union found that the Prosecutor General of Lithuania can be considered a “judicial authority” capable of issuing European Arrest Warrants. The CJEU found it was up to the referring court to determine whether the prosecutor’s decisions are subject to court proceedings fully meeting the requirements for effective judicial protection.

Campbell will have one week to apply for a certificate of appeal from the day of the order, July 13th.