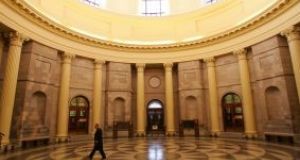 The High Court was told the policy change for driving licences amounted to a disproportionate interference with his client’s rights.

A High Court challenge has been brought over a policy preventing undocumented persons applying for a driving licence here or seeking to have it renewed.

The judicial review proceedings are by a Chinese national who has lived here for more than 18 years, having originally arrived on a student visa which expired some time ago.

He had held a valid driving licence since 2008 but, when he sought to renew it before it expired last August, his application was refused by the National Drivers Licence Service (NDLS) because he was unable to prove his ‘residency entitlement’. The man, represented by Micheál P O’Higgins SC, claims following a policy change in May 2018, he must submit one of several documents, such as a birth certificate, public services card, passport or Irish certificate of naturalisation, before a driving licence can be renewed or issued.

The policy change was introduced by both the NDLS and the Road Safety Authority (RSA). Counsel said the list of acceptable documents means all applications concerning driving licences made by persons not legally present in the state will be refused while those lacking a valid visa will also be excluded.

Counsel said the policy change amounts to a disproportionate interference with his client’s rights. It also offends the spirit and logic of a recent Supreme Court decision striking down as unconstitutional the ban on asylum seekers getting work, he said.

Mr O’Higgins said his client came here some years ago on a student visa, since expired, and has made a life for himself working in Ireland. The man contends, in order to have his licence renewed, he should be only required to show he is normally resident in the state.

His case is that the decision not to permit him renew his licence under the new policy is unlawful and the relevant policy involves excess of jurisdiction.

The proceedings are against the NDLS, the RSA, the Minister for Transport, Tourism and Sport, Ireland and the Attorney General. The man wants orders quashing the refusal of his application to renew his licence, along with the requirement that applicants for driving licences, or for renewals of those, must submit a specified document to prove residency entitlement.

He also wants the court to direct that his application to renew his licence is processed. Permission to seek judicial review was this week granted on an ex parte basis (one side only represented) by Mr Justice Séamus Noonan who returned the matter to next month.