Jury in Paudie Coffey defamation case to return on Tuesday 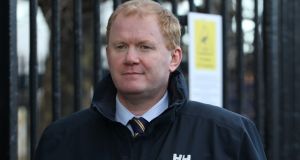 The jury in the defamation action by former minister of state Paudie Coffey against the publisher of the Kilkenny People has been sent home until Tuesday.

It followed five hours of deliberation and Mr Justice Bernard Barton’s direction it could reach a majority verdict of not less than nine to three.

The case, which has taken place over 12 days, centres on the Kilkenny People’s publication in January 2016 of a story featuring comments from Mr Coffey’s Fine Gael colleague, Carlow-Kilkenny TD John Paul Phelan.

Mr Coffey, now a senator, was a Waterford TD and minister of state for environment at the time and claims the article headlined ‘Coffey the Robber’ was a major factor in him losing his Dáil seat about a month later.

Mr Phelan issued a press release responding to an ongoing a dispute about a commission which was looking at moving the administrative boundary of Waterford into Kilkenny .

The release said Mr Coffey had been “banding together” with then minister for the environment Alan Kelly to commit “daylight robbery”. It stated there was an 18th century highwayman in Waterford called ‘Crotty the Robber’ and now ‘Coffey the Robber’ was trying to do the very same.

The court heard the newspaper based an article almost 90 per cent on the press release. Mr Coffey claims the story was defamatory but Iconic Newspapers and journalist Sam Matthews deny the claims.