Perjury warning to key witness could not be regarded as having biased the jury, state argues 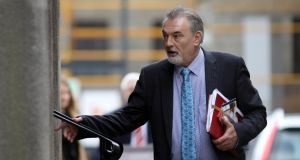 Ian Bailey is appealing the March 2015 dismissal of his claim that various gardaí had conspired to frame him for the murder of Sophie Toscan du Plantier. Photograph: Collins

A High Court judge probably should not have warned key witness Marie Farrell about perjury in front of the jury hearing Ian Bailey’s damages case but it was a “harmless error”, the State has told the Court of Appeal.

The warning by Mr Justice John Hedigan to Ms Farrell, when seen in the entire circumstances of Mr Bailey’s civil case against the Garda Commissioner and State, could not be regarded as having biased the jury against Mr Bailey, Paul O’Higgins SC argued.

He was opposing Mr Bailey’s appeal over the jury’s March 2015 dismissal of his claim various gardaí conspired to frame him for the 1996 murder in west Cork of French film maker Sophie Toscan du Planter.

Mr Bailey’s 17 grounds of appeal include claims Mr Justice Hedigan should not, on day 62 of the 64 day case and following a State application, have withdrawn from the jury most of Mr Bailey’s claims, including of wrongful arrest, on grounds those were statute barred.

Mr Bailey claims that meant the jury was left to consider only a “narrow” aspect of his conspiracy claim.

The State has cross-appealed the judge’s decision insofar as it allowed the jury consider whether three gardaí conspired to frame Mr Bailey for murder. The State contends the conspiracy claim was imprecisely pleaded and was also statute barred.

In his arguments, Mr O’Higgins said the trial judge’s “warning or reminder” about perjury was given in a context including Ms Farrell having made “sensational” allegations against gardaí, including of sexual impropriety, and admitting perjuring herself in separate libel proceedings by Mr Bailey against various media.

Mr O’Higgins agreed with Mr Justice Hogan he himself should probably not have said to Ms Farrell when cross-examining her: “I think you’re lying.”

He was essentially putting to her she was lying and, while he should not have used the words “ I think”, the Bailey case did not involve a “half-way house” concerning statements and allegations by Ms Farrell. Her claims were “either completely false or completely true” and Mr Bailey’s entire case rested on her credibility versus the credibility of various gardaí dealing with her.

As part of presenting the context for the perjury warning, the State played to the court a video recording of an interview Ms Farrell gave in 2012 to the Garda Síochána Ombudsman Commission. When asked about the interview during Mr Bailey’s case, Ms Farrell said she was confused between “fact and fiction” during that interview but was telling the truth to the High Court.

The trial judge was entitled not to allow Robert Sheehan, a solicitor in the DPP’s office who criticised the Garda investigation, give evidence about his 2001 written analysis of that investigation, including his views of the unreliability of Ms Farrell as a witness, counsel submitted.

Mr Sheehan was dealing with whether there was material to charge Mr Bailey, which was not an issue in the High Court case, and seeking to give opinion evidence when he was not an expert witness, he said. Mr Sheehan’s notes concerning his 2001 report were not admissible because they were not made at the relevant time, he argued.

The trial judge was also entitled not to allow Mr Bailey’s side call evidence from a former senior police officer in the UK, in relation to acceptable policing practices, he said.

Asked by the judges why the State only applied towards the end of the case to have it withdrawn as statute barred, counsel said the statute point was pleaded in the defence and gardaí wanted an opportunity to deny very serious claims against them by Ms Farrell. The statute point now seemed mostly relevant to the issue of costs, he added.

Mr Justice Hogan said he understood gardaí wished to seek to vindicate their reputations but he wondered was there not an inconsistency in the defence wanting the case to open and go into evidence and then towards the end of the case “invoke the rule book” and claim statute barred.