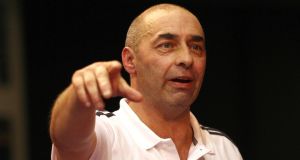 In a statement, boxing coach Pete Taylor said the council used the shooting at Bray Boxing Club in 2018 as a ‘smokescreen to unlawfully evict’ him and the club from the premises. File photograph: James Crombie/Inpho

Wicklow County Council has told the High Court boxing coach Pete Taylor is not entitled to an injunction preventing it terminating his and Bray Boxing Club’s legal interest in the premises used by the boxers for years.

Mr Taylor, father of Olympic and world champion boxer Katie Taylor, claims the council is wrongfully trying to evict him and the club from a council-owned facility at the Harbour Shed, Bray.

Represented by Richard Kean SC, with Gareth Robinson, instructed by solicitor Georgina Robinson, Mr Taylor and Bray Boxing Club Ltd, of which Mr Taylor is a director, seek an injunction restraining the council terminating their legal interest in their possession of the premises in the absence of a properly obtained court order.

They claim they entered into an agreement to lease the club premises in 2007 and, after the lease expired in 2014, remained on under a number of licence agreements. The injunction is sought to apply pending the outcome of the legal dispute.

Seeking the order, Mr Kean said the court did not have to decide any proprietary interest until the full hearing of the dispute. His client feared, if the injunction was not granted, the council may put another club in the premises, rending this action moot or pointless. The council, represented by Esmonde Keane SC and Carol O’Farrell, opposed the application.

Mr Keane said the applicants case was unstateable, they had no proprietary entitlement to the premises and merely had a “bare licence” agreement. The council also claimed no rent had been paid for some years on the premises, the rebuilding of which cost it €195,000 in 2013.

A “bare” licence merely gives permission to a person to enter onto another entity’s property and can be terminated at any time, without any reason being given, Mr Keane said. Mr Justice Senan Allen, having heard both sides, said he would give his decision as soon as possible.

The proceedings were brought after the council changed the locks on the premises in June 2018 after three people, including Mr Taylor, were shot at the gym. One of those shot, Bobby Messett, died. Mr Taylor, the club and its members have been out of the facility since.

In 2005, Mr Taylor secured the use of the premises, which had been used as a store shed by the local authority, for use as a boxing gym, his counsel said. Over the years the club, which has produced some top and highly decorated boxers including Katie Taylor, enhanced and equipped the facility with the help of a sports capital grant, counsel said.

In 2017, the council sought a “large, unfair and crippling” increase in the annual rent to €15,000 per year, an increase of €11,500. After the June 2018 shooting, the council had, without prior warning, changed the locks at the premises and informed the club it was taking possession so it could be cleaned, fixed and restored for use as a sports’ facility, counsel said.

In a sworn statement, Mr Taylor said the council used that violent incident as a “smokescreen to unlawfully evict” him and the club from the premises. It was always his intention to return and operate the club as previously and the council was not entitled to retake the property in the manner in which it has done for many years.

Mr Taylor said the council posted an eviction notice outside the premises last November giving him and the club 10 days to vacate the premises. Mr Kean said no rent had been paid for several years but no proceedings were taken over the years and the council had opted not to mediate the dispute.

The council accepts it changed the locks, but says neither Mr Taylor nor Bray Boxing Club Ltd have any proprietary interest in the club premises and denies it acted unlawfully.