Judge ruled only ‘central claim’ of conspiracy could be considered 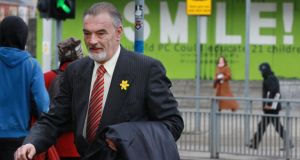 A key ruling about what issues could be decided by the jury was made by Mr Justice John Hedigan after the State applied for all of Ian Bailey’s case to be withdrawn from the jury.

The judge ruled only the “central claim” of conspiracy could be decided by the jury and dismissed the other claims. The “central claim all along” was of a conspiracy by some gardaí to get Marie Farrell to make statements via threats, inducements or intimidation, implicating Mr Bailey in the murder of Sophie Toscan Du Plantier, he said.

If the gardaí did that, it was “an action that affronts all norms of law and an attack on the rule of law”, the judge said. “It would be, if true, an attempt to pervert the course of justice and remains a live attempt if true.”

The statements “remain lying heavily” upon Mr Bailey’s reputation and, although retracted as false by Ms Farrell, gardaí today insist they wrote down exactly what she said at the time, he said.

The State application to withdraw the entire case from the jury on grounds including much of it was statute barred was made “at the last possible moment”, 62 days into the case, the judge noted. However, the State could still make it.

The State argued Mr Bailey’s claim was entirely, or partly, statute barred meaning it was brought outside the applicable six year legal time limit. The case was brought in May 2007 and the application of the six year limit meant no claims relating to events before May 2001 could be brought.

The judge said the conspiracy claim was that a number of gardaí - Det Garda Jim Fitzgerald, Sgt Maurice Walsh, Det Garda Slattery and Garda Kevin Kelleher - conspired to implicate Mr Bailey in the murder by obtaining from Marie Farrell statements identifying Mr Bailey close to the scene of the crime on the same morning around the time of its commission and statements accusing Mr Bailey of intimidating Ms Farrell when they knew those statements were false.

The claim was those statements were procured through threats and intimidation, the judge said. Mr Bailey alleged this was a campaign to pervert the course of justice by fixing him with guilt for the murder in the full knowledge of his innocence and, as a result, he endured years of “vilification and demonisation” in the eyes of the public.

While the claim concerning Ms Farrell’s statements arose from the pre-2001 period, the judge said there was a continuing cause of action giving rise to a fresh cause of action because Ms Farrell’s statements remain on the Garda file, gardaí insisted they were true and accurate statements, the murder investigation is still alive and Mr Bailey “remains a person of interest”. The alleged conspiracy, if it existed, “is alive and continuing today” but the issue whether or not it actually happened was for the jury to decide.

The questions remaining for the jury were in many ways “the central plank of this case from the beginning” - did Garda Fitzgerald, Slattery, Walsh and Kelleher or any combination of them conspire to implicate Mr Bailey in the murder by obtaining statements from Marie Farrell by the use of threats, inducements or intimidation identifying him as the man whom she saw at the scene of the murder when they knew those statements to be false.

The second question was did Garda Fitzgerald and Sgt Walsh conspire together to obtain from Ms Farrell by threats, inducements or intimidation statements that Mr Bailey had intimidated her.

Earlier, the judge upheld the State’s arguments Mr Bailey could not claim damages for loss of reputation as any such claim must be brought in defamation proceedings; any wrongdoing had not led to any damage which could form the basis of a claim; the courts have no general supervisory jurisdiction over gardaí; and it would be “perverse” for a properly instructed jury to find there was no reasonable grounds to arrest Mr Bailey. He also noted negligence was not claimed.

No claim arose from the European Arrest Warrant proceedings because all such proceedings operated in accordance with law and there was no evidence of unlawfulness and Garda actions in that regard, he said. Mr Bailey’s 2003 libel actions also gave rise to no claim for damages.

Mr Bailey’s lawyers had argued the statute point should not be accepted at this stage of the case, when enormous costs had been incurred by the public purse and Mr Bailey. The application amounted to abuse of process as it could have been made much earlier, even at the start of the case, and the allegations were so serious the public interest required they be decided by a jury, they argued.

The Bailey side argued the alleged conspiracy is continuing, Mr Bailey is still a person of interest, the defendants engaged in “unconscionable” behaviour with persons with whom they had a special relationship and the libel cases and EAW proceedings were a result of the conspiracy to implicate Mr Bailey.

The State said the law allowed it make the statute point at any stage of the case, it had pleaded it from the start but needed to hear all of the evidence before making it, and allegations made against several senior gardaí were “of the gravest nature” and they were entitled to publicly deny them.

The judge said the jury are the judges of facts and a case could only be withdrawn from them when a judge was satisfied no case in law exists. When a judge does so decide, that must be in justice to the defendants.

The statute is clear and provides, in this type of action, no grace based on when a person became aware of alleged unlawful acts, he said. This case was initiated on May 1st 2007 and in such a case of trespass against the person, the six year limit operated from the time the acts complained of were committed.

This meant any claim based on action that occurred before May 1st 2001 was statute barred except claims that gave rise to a continuing trespass. Both arrests were statute barred and, having heard all the evidence, no properly instructed jury could reasonably find gardaí did not have a reasonable suspicion upon which they could base a lawful arrest, he said. The arrests were based on suspicion grounded on numerous reasons other than the statements of Marie Farrell, he added.

“The grounds for suspicion for both arrests were so strong that had the gardaí not arrested Ian Bailey, they would have been derelict in their duty.”

Withdrawing the other claims from the jury, he ruled damages for loss of reputation should be brought in defamation proceedings and, as Mr Bailey brought libel proceedings in 2003, he could not pursue similar claims here. No claim arose from the libel actions which settled on terms not disclosed by Mr Bailey, he added.

He agreed the courts have no general supervisory role over the Garda as to the manner in which they conduct investigations and no claim on that basis could proceed.

The claims concerning Martin Graham, who alleged he was given cash and cannabis by gardaí during 1997 to get close to Mr Bailey, was also caught by the statute. If Mr Graham’s evidence was accepted, the events surrounding him had no consequence for Mr Bailey as no confession or prejudicial material was obtained as a result, the judge added.

On claims about damaging media coverage, he said it was impossible to disentangle media coverage pre and post 2001. Claims concerning reports before 2001 were statute barred, the later coverage was uncontrollable by anyone and no claim concerning that could be based on the evidence given.

Accepting no claim arose under the European Arrest Warrant process, he said the French applied in 2006 for mutual assistance in their investigation into the murder and the Department of Justice did not activate that until it was told in 2008 by the Garda there would be no prosecution. The French issued an EAW in 2010 and a process before the courts ensued in accordance with Ireland’s international legal obligations and lead to the Supreme Court refusing to extradite Mr Bailey.

Such a process can be “highly stressful and frightening” for a person but it was a legal process which “no Garda misdeeds could stymie”. It was clear the French carried out their own investigation, got the full Garda file, including evidence of Marie Farrell’s retraction of her statements, and interviewed gardaí and other witnesses. It was “impossible to speculate” what reasons they had for their investigation.