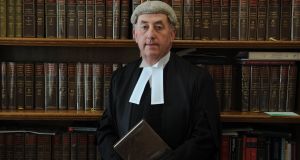 The High Court has ordered that a young woman who has not eaten for a week and who has a long history of anorexia nervosa and psychiatric illness be detained in hospital and tube fed.

The president of the High Court, Mr Justice Peter Kelly, said it was a very sad case.

He noted medical evidence the woman believes she is grossly obese, and had told doctors she hears voices telling her so, when in fact she weighs less than 40kg. That is not a safe weight for her age and build.

Aged in her 30s, she recently made two serious suicide attempts.

She had told her doctor of several years voices were telling her she should starve herself to death and did not deserve to eat. Her doctor considered, due to hallucinations, delusions and an underlying psychiatric illness, she currently lacks capacity to make decisions about her welfare.

In evidence, the doctor said the woman became very unwell about a week ago and refused to eat or drink. She was being given boluses of fluid but, because she is on a psychiatric ward, cannot have the same care as she would have on a medical ward and was moving between the two with no improvement and unstable sugars.

In those circumstances, orders for naso gastric feeding and detention in the hospital were sought by Paul Brady BL, for the HSE.

Having received a detailed report from her doctor, and heard oral evidence, the judge made orders permitting the hospital detain the woman and for her to receive naso gastric feeding other treatments, including Electro Convulsive Therapy (ECT), as considered necessary by her treating team.

Her doctor said she has benefitted in the past from ECT and some of the current difficulties may have arisen because she had not completed, for a number of reasons, a recent course of ECT.

While she had done well for periods in the past, and had her eating disorder under control, her situation had deteriorated in the last few years following the death of a close relative, she said.

Her mother, who had mental health and other issues, had died when the girl was a teenager and that badly affected her, she said.

When well, the woman is very intelligent and has lived independently and it was hoped with the proposed treatment she would recover, she said.

Her father supported the orders sought, she added.

The orders were sought in the context of an intended application to have the woman made a ward of court on the basis she lacks capacity to make decisions about her welfare.

The judge said the evidence is the woman is currently of unsound mind but stressed he was not deciding that issue now.

On foot of the existing evidence, he would make the orders and hoped the treatment will be successful. He directed an independent medical visitor assess the woman and report back to the court in relation to her capacity.

A decision on whether she should be taken into wardship will be made later.