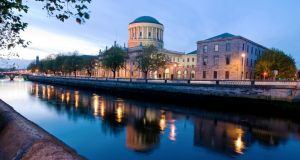 A High Court judge has rejected a man’s claim he was maliciously prosecuted arising from an incident during a Shell to Sea protest in Co Mayo.

Mr Justice Max Barrett said the prosecution of Raymond Hanrahan on a charge of criminal damage to a Garda’s jacket “was not run as well as it could have been” but there was no evidence of malice, “none at all”.

His decision concerned the final part of Mr Hanrahan’s civil action for damages, brought against the Garda Commissioner and the State, arising from the August 20th 2011 protest on the public road near the entrance to the Shell gas terminal at Glenamoy.

A High Court jury had on February 20th last dismissed claims by Mr Hanrahan he was assaulted by Garda Justin Browne during the protest by being pushed out of the way when Mr Hanrahan entered the middle of the road to attempt to block a tractor heading towards the refinery.

After that verdict, the judge heard submissions concerning the claim of malicious prosecution which he had earlier determined had to be addressed by the court, not the jury.

In a judgment delivered electronically on Tuesday, Mr Justice Barrett said, during the protest, Mr Hanrahan (50), of Fairhill, Cork, was pushed by Garda Browne, then temporarily stationed in Belmullet from Drumlish Garda station.

Mr Hanrahan “took umbrage” at this and resolved to take the garda’s shoulder epaulette number for the purpose of making a complaint.

Because Garda Browne was moving away from him, he reached for the Garda’s shoulder and somehow managed to rip an epaulette from his high vis jacket.

As a result, Mr Hanrahan was subsequently charged with criminal damage to the garda’s jacket.

The judge said it seemed the normal procedure, given the jacket was to become evidence in a criminal trial, would have been to place it in an evidence bag, with the chain of custody documented compehensively after that.

Counsel for the defence had indicated to the court the failure to follow this procedure, “and failure there was”, meant the outcome of the eventual prosecution “was always in jeopardy”.

Mr Hanrahan was convicted in the District Court but his conviction was quashed on appeal when it became clear there could be no certainty that the right jacket was tendered in evidence.

In his evidence to the High Court, Garda Browne was “notably honest”; he had said he could not explain how he came to tender the wrong jacket, he seemed embarrassed by this fact and it seems almost certain the error derived from the initial failure to place the jacket in the evidence bag, the judge said.

Garda Browne had also made clear in his evidence he bears no personal ill-will towards Mr Harahan and was simply doing his duty as he saw it, the judge added.

He said malicious prosecution is concerned with excess/abuse of privilege but the evidence here, on the balance of probabilities, did not point to any such abuse.

The evidence also did not point to a lack of reasonable or probable cause for the prosecution and rather “points in the opposite direction”, he said. There was no evidence of malice before the court, “none at all”.

“All that presents is a prosecution that was not run as well as it could have been, but without any evidence of “evil motive”.