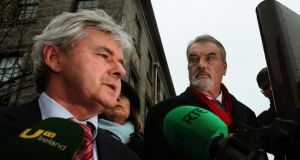 Ian Bailey accompanied by his solicitor Frank Buttimer (left) outside the Four Courts in Dublin after lhis case over allegations that gardaí conspired against him when investigating the death of Sophie Toscan du Plantier. Photograph: Brian Lawless/PA Wire.

Ian Bailey still believes he can prove that gardaí conspired to implicate him in the murder of Sophie Toscan du Plantier, and will consider an appeal over his unsuccessful court case, his solicitor has said.

In a verdict delivered on Monday following a five-month civil case, members of the jury decided that gardaí based in Cork had not conspired to use threats and intimidation in order to obtain statements from witness Marie Farrell to the effect that Mr Bailey had been responsible for the French film-maker’s death.

In a statement provided to the media outside the High Court afterwards, a member of Mr Bailey’s legal team expressed his client’s disappointment with the verdict, and suggested that further action would be considered.

“Speaking on Mr Bailey’s behalf, he is obviously very disappointed with the outcome. He gave this case his very best effort, he thought- and indeed does still think- that he had sufficient evidence to sway the jury in his favour,” said solicitor Frank Buttimer, flanked by Mr Bailey and his partner Jules Thomas.

“We will have to consider the result, consider our options, and at this point in time I think it is appropriate out of respect for the fact that the decision has just been handed down that we might be given space and time to consider what might arise from here-on in.”

Mr Buttimer said Mr Bailey has a “deep and abiding respect” for the Irish legal system, and thanked the jury for their involvement following some two hours of deliberations.

“He appreciates the fact that the jury gave this case the attention that it did give the case, and that is to be acknowledged... he has been treated very courteously by all the people connected with the court process, by the court itself and the jury, and he would like to express his appreciation for that,” he said.

“I think there’s little else to say at this point in time because I think it is a situation that Mr Bailey will have to evaluate, and whatever decision is to be made [on] today’s outcome will be communicated in due course.”