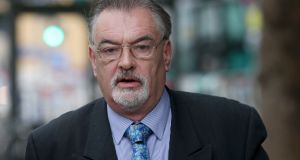 Ian Bailey: French authorities who want to try him for the voluntary homicide of Sophie Toscan du Plantier in 1996. Photograph: Collins Courts.

Ian Bailey’s legal team has submitted points of objection to the application by French authorities to have him extradited for the alleged voluntary homicide of Sophie Toscan du Plantier.

At a brief hearing at the High Court on Friday, legal representatives of Mr Bailey and Minister for Justice Frances Fitzgerald agreed to put the case back until May 12th to allow time to file affidavits.

Robert Barron SC, for the Minister, said he had received points of objection and would need time to consider them.

Mr Justice Tony Hunt adjourned the case to May 12th and asked each side to submit affidavits by May 5th.

French authorities have already served Mr Bailey with an indictment and want him to face trial in France for the alleged voluntary homicide of the film-maker, who was found beaten to death outside her holiday home in Schull, west Cork in December 1996.

Mr Bailey has denied all links to the death of Ms Toscan du Plantier and alleges a Garda conspiracy to frame him for her killing.

This is the second time the French authorities have tried to bring Mr Bailey to France following a rejection by the Supreme Court in 2012.