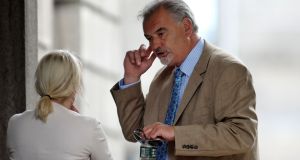 Ian Bailey arriving at the Cour of Appeal in the Four Courts. Photograph: Collins Courts.

Ian Bailey has lost most grounds of his appeal against a High Court jury’s rejection of his civil action for damages against the Garda Commissioner and State over the conduct of the Garda investigation into the murder of Sophie Toscan du Plantier.

The Court of Appeal ruling paves the way for a fresh trial on one issue - if alleged wrongful disclosure by gardaí of confidential information to media organisations before Mr Bailey’s libel cases against various media in late 2003 amounted to conspiracy by unlawful means and/or breached his constitutional right to privacy.

Mr Bailey claims gardaí disclosed information from statements made by Marie Farrell, a key witness in the murder investigation, prior to the Circuit Court libel proceedings, which were settled.

The appeal court ruled this claim was not statute barred and the High Court was wrong not to let it be decided by the jury.

When viewed against “the large panorama of complaints” against gardaí, this claim may in one view amount to an issue of lesser importance but it could not agree with the High Court, if such disclosure occurred, it was impossible to separate it from earlier advance publicity which was statute barred, it said.

After a 64 day hearing, a High Court jury in March 2015 dismissed Mr Bailey’s claims that three gardaí conspired to frame him for the 1996 murder in west Cork. Two days earlier the defendants got an order from the trial judge, Mr Justice John Hedigan, dismissing most of Mr Bailey’s other claims as statute barred - brought outside the six year time limit.

He appealed on 17 grounds while the State cross-appealed the trial judge’s decision to let the jury consider whether the three gardaí conspired to frame him for murder.

While in other circumstances it might be more satisfactory to address the statute point at an earlier stage of the trial, the statute was pleaded in the State’s defence and Mr Bailey’s essential claim was “a complex one of an overarching conspiracy by gardai which did not lend itself to easy adjudication”.

Dimissing the State’s claim the High Court should not have permitted the jury to decide Mr Bailey’s claim three gardaí conspired to frame him for the murder, it said the trial judge correctly held, if Mr Bailey was correct in that, it constituted a “continuing” conspiracy and was not statute barred.

With the exception of the issue of alleged disclosures to the media, all of the alleged other wrongs to Mr Bailey occurred from late 1996 and before May 2001, six years before his case was initiated in May 2007, and were accordingly statute barred.

Mr Bailey’s claim was the alleged conspiracy was put into effect between 1997-1998 during which time he claimed Ms Farrell was induced by gardaí into making a false statement implicating him.

He also claimed he was twice falsely arrested; former British Army soldier Martin Graham was given money, clothes and cannabis to befriend Mr Bailey in the hope he would make an admission; and State solicitor for west Cork, Malachy Boohig, was spoken to by senior gardaí in the hope he would speak to the Minister for Justice with a view to pressuring the DPP to launch a prosecution.

While Mr Bailey’s house was also searched in September 2000, any cause of action arising from that was statute barred by September 2006 and this meant, subject to two important exceptions, Mr Bailey’s conspiracy claim crystallised at this point, the court said.

The exceptions were (1) the alleged unlawful disclosure of confidential information by gardaí to the media in late 2003 and (2) the claim three gardaí conspired to frame Mr Bailey for murder.

The court dismissed other claims, including the trial judge wrongly warned Ms Farrell about perjury in front of the jury. While a trial judge should “generally be slow” to warn a witness about credibility of their evidence, “if there was ever a case where such a warning was necessary it was probably in the case of Ms Farrell,” it said.

Ms Farrell was a key witness who had admitted she previously committed perjury, dramatically left the witness box and who at different stages had given evidence on critical issues which involved “dramatic inconsistencies”.

In her case, the warning was “appropriate and timely” and the trial judge also later stressed to the jury her credibility was a matter for them.

It rejected claims a remark to Ms Farrell by State counsel Paul O’Higgins that he thought she “is telling lies” - made during cross-examination about her claim a naked garda asked her for sex - was unfair and said it was at worst a harmnless error.

It dismissed other claims the trial judge wrongly curtailed evidence from former DPPs Eamonn Barnes and James Hamilton and from Robert Sheehan, a solicitor in the DPP’s office who criticised the Garda investigation.

While opinion evidence from these three “very distinguished professional witnesses” amounted to their view the prosecution case against Mr Bailey was “a poor one”, such opinion evidence could not be tendered, it held.

1 Luke ‘Ming’ Flanagan bares his bottom half to European Parliament
2 Easing restrictions: What exactly will happen next Monday?
3 A third of arrivals in Ireland are not answering phone for self-isolation checks
4 George Floyd: US protesters defy curfew as demonstrations over killing rage on
5 More than 200 people contracted Covid-19 while in hospital for other conditions
Real news has value SUBSCRIBE