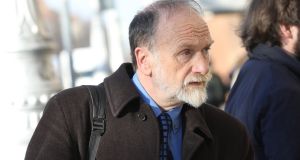 Eamonn Murphy said he has made a criminal complaint about the HSE’s ‘MyOptions’ and against the Minister for Health. Photograph: Collins

The Health Services Executive has secured a temporary High Court injunction against a man who has allegedly set up a misleading website that is confusingly similar to the HSE’s crisis pregnancy freephone service ‘My Options’.

The temporary injunction was granted on Friday by Ms Justice Leonie Reynolds against Eamonn Murphy, who the HSE claims has established a website passing off the service known as ‘My Options’.

Mr Murphy denies any wrongdoing and had opposed the granting of an injunction that would result in him having to suspend the website called ‘www.myoptions.website’.

The order prevents Mr Murphy, or anyone under his control from using a website he allegedly registered last month called ‘www.myoptions.website’, or any other variation of a website using the term ‘myoptions’ until further order of the court.

The judge said she was making the order in order to deal with the “immediate” and “clear confusion” that was being caused by the use of the term ‘my options’ in website names.

Representing himself Mr Murphy had sought an adjournment in order to obtain lawyers to contest the injunction application.

However, as he was not prepared to offer the court an undertaking not to suspend the operation of ‘www.myoptions.website’, until the case has been determined, the judge said she was putting a temporary order in place until both side’s cases are before the court.

The HSE, represented by Jonathan Newman SC, and Michael Binchy Bl, claims Mr Murphy is inappropriately offering pregnancy scans, is trying to convince women not to go ahead with abortions, or berating those who have chosen to undergo a termination.

Mr Murphy with an address at Finglas Road Dublin 11, allegedly registered that websites domain name days after the Minister for Health publically announced that the HSE’s service would be called ‘My Options’.

The HSE claims Mr Murphy’s actions are not a coincidence, are leading to substantial confusion and is damaging the goodwill and reputation of the HSE’s service.

In December the HSE secured the contract to run the freephone information and confidential counselling service, which is the first point of contact between it and the public.

The HSE says that in recent weeks it became aware of a website called ‘www.myoptions.website’ which contains Mr Murphy’s phone number, promises a free ultrasound.

The HSE says women are finding the defendant when they intend to find the service operated by the HSE.

The website is also giving the impression Mr Murphy is offering services in connection with the HSE, or that objective counselling and information services are being provided, it is claimed.

The HSE says it asked him to remove or rename the website, but he has failed to do so.

In court, Mr Murphy denied any wrongdoing and said it was the HSE who was causing the confusion.

He told the court he wished to bring a counteraction against the HSE over the use of ‘MyOptions’and the service it offers.

He also told the court he intends to take an action over the HSE’s ‘myoptions.ie’ service because it was putting women’s lives in “real danger.”

He said the ‘myoptions.website’ had been extremely successful and had hits from persons all over the world.

He said the service saved the lives of woman and babies. He also claimed that the service being operated by the HSE was flawed and had resulted in “the unlawful killing of babies.”

In addition, he said that he had made a criminal complaint about the service, Minister for Health Simon Harris and doctors to gardaí.

Ms Justice Reynolds, noting that the ‘myoptions.website’ domain name was registered by Mr Murphy two days after the Minister for Health had announced that the service would be called ‘My Options’, said she was satisfied to make the temporary order.

That took the urgency out of the matter, the Judge said.

Mr Murphy, the judge said, was free to continue to operate the lawful service he has been providing since the 1990s. Nobody was stopping him from doing that, she said.

However, the judge said any breach of that would have serious consequences.

The matter will return before the court in two weeks time.