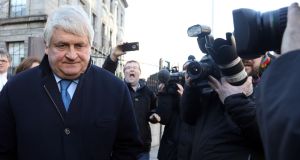 Denis O Brien: Judge says his complaint against committee has its origins in Dáil utterances which the courts are not allowed to review. File photograph: Collins Courts

Businessman Denis O’Brien’s case against the Dáil and its Committee on Procedure and Privileges has been resoundingly rejected by the High Court. O’Brien wanted the court to censure TDs Catherine Murphy and Pearse Doherty for disclosing aspects of his banking arrangements which were the subject of an injunction he had secured against RTÉ.

However, the Dáil argued in response that there was a constitutional prohibition on the courts becoming involved in reviewing utterances that are made in the Oireachtas.

The prohibition is a fundamental part of the separation of powers and a well-recognised and ancient device designed to allow societies, through their parliaments, freely debate matters of public interest.

There was no role for the courts, said Ms Justice Úna Ní Raifeartaigh, in deciding what was a legitimate use of parliamentary privilege and what was not, something O’Brien had asked the court to do.

She quoted Mr Justice William McKechnie of the Supreme Court in a judgment relating to former politician Ivor Callely and his dispute with an Oireachtas committee. McKechnie referred to the “enormity of the immunities” that politicians had when speaking in the Oireachtas, courtesy of the privileges set out in article 15 of the Constitution in language that is quite robust.

The exercise of the privilege “may have the potential of inflicting grave damage and creating even life-threatening consequences for third parties who, despite the circumstances, must remain without legal redress as the justice system is left powerless to intervene”.

Given that high a threshold, it was always hard to imagine that O’Brien’s complaint about his banking details being disclosed would be considered sufficiently grave that the courts might venture into the no man’s land that separates judges in their courtrooms, and politicians speaking in parliament.

In fact, Ní Raifeartaigh said she was not sure if there was an “exceptional case” aspect of the constitutional prohibition on the courts becoming involved in reviewing parliamentary debate.

Now matter how “frustrating and infuriating” O’Brien might have found what happened to him and no matter how “dramatically and directly the actions of the deputies in this case violated the usual principle of comity operating between the Oireachtas and the courts”, the disclosure of his banking details was not an event of “such gravity and threat to the constitutional order” that it would allow the courts to get involved, even if such an exceptional power did exist.

In relation to O’Brien’s complaints against the committee, which is charged with policing, so to speak, the use by politicians of their parliamentary privilege, the judge also found against O’Brien.

The committee’s review of what had happened concerned the TDs’ actions, not O’Brien’s, and was an internal matter for the parliament. Furthermore, O’Brien’s complaint against the committee had its origins in Dáil utterances which the courts are not allowed to review. The door was not just closed, but “double-locked”, she said.

It is because of the privilege that the Oireachtas carries that it has structures of its own that are designed to allow it to manage its own affairs by way of parliamentary committees.

Ní Raifeartaigh said the rules created by our politicians in relation to their discussing matters that were before the courts might be given greater clarity and that a review of the issue might be in order.

However, “while any such discussion as to the future of the sub judice standing order [of the Oireachtas] could be progressed in the public arena and within the Houses of the Oireachtas, it cannot proceed further in this court”.

Health staff will not be offered choice of Covid-19 vaccine – HSE 13:43
Nphet says normal life ‘some way off’ and vaccination unlikely to fully halt Covid-19 13:29
Covid-19: Catholic bishops call on all to support vaccination programme 13:14
Family of woman who died from cervical cancer settles case 12:52
Covid-19 Vaccine Tracker: What's available in the Republic of Ireland and what else is coming? 11:57