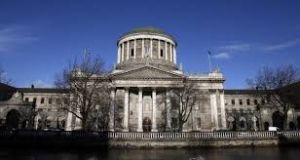 Mr Justice Senan Allen adjourned the matter for a month and gave directions for an early trial of the ownership issue.

The High Court has refused to continue an injunction preventing a race horse which was believed to have been slaughtered from racing.

Mr Justice Senan Allen found the Tartan Spartan, which had been sent for slaughter by its owners in 2019 because they said it was “beyond repair”, should not be prevented from racing pending determination of its current ownership.

He adjourned the matter for a month and gave directions for an early trial of the ownership issue.

The case arose after Andrew Hughes, manager of Thistle Bloodstock, saw the horse was entered for the 3.22pm race in Naas on February 8th.

He instructed his lawyers to seek an injunction because he had sent the stallion for slaughter in 2019. It had suffered a tendon injury and was “broke down”.

Mr Justice Allen said in seeking that injunction, Mr Hughes swore a statement that ownership had never changed when he sent it for slaughter and he still had its horse passport. Mr Hughes later corrected that saying the passport had been sent with the horse.