High Court overturns permission on consent for 164 houses in Howth

Fresh application for a ‘very similar’ development has been made, court told 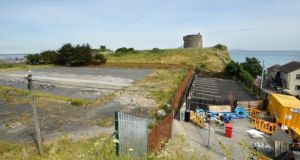 Site at Howth where planning permisison for a proposed housing development has been overturned on consent in the High Court but a fresh planning application has been made. File photograph: Dara Mac Dónaill

The High Court has overturned, on consent, planning permission for construction of 164 homes on the site of a disused hotel in Howth village.

A fresh application for permission for a “very similar” development has been made, Mr Justice Garrett Simons was told on Thursday.

A decision on that application by An Bord Pleanála is expected within the next few months. The second application, like the first, was made under the fast-track strategic housing development procedures.

Among various claims the residents alleged, the board was required, under an EU Directive and planning regulations, to carry out a Stage 1 screening considering the development in its entirety and had insufficient information before it to consider the effects of the development. They also had concerns about the extent and impact of excavated material from the site prior to construction.

It was claimed it was proposed to remove 80,000 square metres of material including clay, sand and gravel and this was likely to have a significant adverse impact on the environment, human beings, flora, fauna, habitats and ecosystems.

When the case came before Mr Justice Simons on Thursday, he was told by Rory Mulcahy SC, for the board, that a fresh application for permission for a very similar development has been made. The board, having regard to the information in that application, was not opposing the judicial review, counsel said.

One of the issues raised by the applicants was that the screening could not have been competed without considering the impact of excavation and such an assessment has now been conducted, he added.

He said the sides had agreed an order could be made on consent setting aside the disputed permission subject of these proceedings and awarding costs to the applicants against the board.

Michael O’Donnell BL, instructed by O’Connell & Clarke Solicitors, for the residents company, confirmed that was the position.