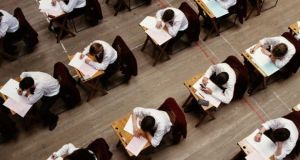 Mr Justice Meenan made directions for the exchange of documents between the sides for the October 21st hearing.

An action by a Leaving Cert student at Dublin’s Belvedere College has been chosen as the “lead” challenge over the standardisation of 2020 Leaving Cert grades.

The outcome of the case by Freddy Sherry, to be heard on October 21st, is expected to impact on other challenges over the standardisation process, all of which have been adjourned to await the outcome.

Separately, Brian Kennedy SC, for the Minister for Education, told Mr Justice Charles Meenan on Wednesday the Minister intends to appeal the judge’s decision last week upholding another student’s challenge to the refusal to consider her for calculated grades.

The judge dealt earlier on Wednesday with case management issues in three separate cases over the standardisation process.

He directed that applications for permission to bring an additional two new cases, by students who sat the 2019 Leaving Cert and claim the 2020 standardisation process has unfairly affected them, should be made on notice to the Minister. Should leave be granted, those will not be heard before the outcome of the case by Mr Sherry, he directed.

In his action, Mr Sherry, of Newtown, Celbridge, Co Kildare, represented by Micheál P O’Higgins SC, Feichin McDonagh SC and Brendan Hennessy BL, instructed by Ferry Solicitors, claims a decision by the Minister for Education last August “interfered” with the work of the Independent Steering Committee on Calculated Grades.

He claims the Minister’s direction not to rely on previous school data or schools historic records in the standardisation process lead to him being unfairly downgraded by 55 points in his Leaving Cert this year.

He was “hugely disappointed” that his teachers’ estimated CAO points total of 542 for him was reduced to 487 under the process, his first course choice was pharmacy in TCD and he may now have to sit the Leaving Cert exam in November, Mr Sherry said.

Having been told on Wednesday the sides agreed his case could proceed as the lead case, Mr Justice Meenan made directions for the exchange of documents between the sides for the October 21st hearing.

The judge was told the sides had decided that another case, that of Áine Finnegan, of Fairview, Dublin, represented by the same counsel and solicitor Eileen McCabe, would not proceed as the lead case, despite having been initiated before Mr Sherry’s, because Ms Finnegan has taken up an offer of an alternative college place other than her first choice.

Ms Finnegan wants to concentrate on her studies for now and would await the outcome of the lead case, the judge was told.

A third case, by the Board of Management of St Kilian’s German school in Dublin and eight of its students, who claim the standardisation model lead to an “extraordinary” downgrading of results in German and other subjects there, will also await the outcome.

The judge also on Wednesday made formal orders arising from his judgment last week overturning the Minister for Education’s refusal to consider a home-schooled Leaving Cert student for calculated grades on the basis none of those involved in her schooling were registered teachers. The formal orders included a declaration that the refusal to provide a calculated grade in any circumstances where the applicant is home schooled by a teacher or teachers who are not registered is “irrational, arbitrary, unfair and unlawful”. The judge also awarded costs to the student against the Minister.

Mr Kennedy, for the Minister, said the judge’s decision would be appealed and, in those circumstances, the judge put a stay on his orders.

Mr Kennedy said, while another home-schooled student, Elijah Burke, had been awarded calculated grades after the judge found in his favour in a separate challenge, the girl’s case was regarded as different by the Minister’s side.

There are a considerable number of students in her position and each of their situations will be considered on a case by case basis, counsel said.

Mr Burke (18), from Co Mayo, was home-schooled by his mother, a registered teacher but, in his judgment on the girl’s case, the judge disagreed with the Minister’s argument that meant the Burke case could be distinguished from the girl’s case. The judge’s ruling in favour of Mr Burke is also being appealed.

Government planned to extend sweeping pandemic powers with 45-minute debate 13:12
Only urgent personal injury cases will be heard during Level 5, judge says 13:01
Level 5 latest: Gardaí to be given new powers to fine people for holding house parties 13:15
Going to Higher Options this November? Plan ahead! 12:16
Conditions imposed on pharmacist’s registration over supply of controlled drug 12:13