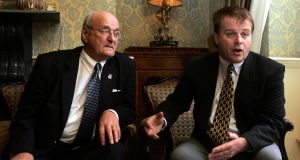 The handling of the investigation into the murder of Co Louth man Séamus Ludlow 40 years ago suggests a “scandal” extending to the “highest levels” of the Garda force and government, the High Court was told on Tuesday.

If, as Mr Ludlow’s family believe, a political decision was made here not to pursue questioning of Northern Ireland-based suspects due to an unwillingness to provide reciprocal arrangements to the RUC, the family were treated in an “appalling” manner, Ronan Lavery QC said.

Mr Lavery, for Kevin Fox, a nephew of Mr Ludlow, was opening proceedings on Tuesday against the Minister for Justice and State aimed at establishing two commissions of inquiry into the murder, as recommended by a 2006 Oireachtas Joint Committee. This was based on the findings of retired High Court judge Henry Barron in his report into the murder of Mr Ludlow.

In an affidavit, Mr Fox said Annie Ludlow, mother of Séamus Ludlow, died without knowing what had happened to her son, “who was responsible and who failed to prevent it”.

Her siblings are elderly and unable to take court proceedings, but “desperately seek the truth before they also die” and it was left to his generation “to continue this fight for truth”.

Mr Ludlow’s body was found with bullet wounds on May 1st, 1976, in a lane near his home at Culfore, Dundalk. The forestry worker had no paramilitary connections and no one has ever been charged in connection with his murder.

His family say gardaí failed to pursue an important line of inquiry – that Mr Ludlow was a victim of either loyalist or British forces who mistook him for a senior member of the IRA. They believe he was an innocent victim of a loyalist death squad, comprising a Red Hand Commando and two members of the Ulster Defence Regiment (UDR).

The Garda investigation into the murder was suspended after just three weeks without explanation, the family claim. They also allege gardaí spread unfounded claims he had been killed by the IRA for informing and they, the family, had known about the planned killing beforehand.

The IRA denied any involvement and journalist Ed Moloney, who had written extensively about killings in Northern Ireland, said this had none of the hallmarks of the IRA’s murder of informers, Mr Lavery said.

In opposing the case, the State defendants say the courts cannot direct the State to establish commissions of inquiry. It is pleaded the State’s investigative obligations in this case have been exhausted and there is no “right to truth” under Irish or European law. It also says the Garda investigation into the murder remains open and, to date, the DPPs here and in Northern Ireland had found no basis for a prosecution.

On Tuesday, Mr Lavery told Ms Justice Mary Faherty it was not enough for the State to say the family got a public apology over the handling of the Garda investigation as the apology involved “no explanation or accountability”.

The State had failed to advance good nor lawful reasons for its failure to establish the inquiries and the family was also entitled, under the European Convention on Human Rights, to an effective remedy, he said.

The Oireachtas Joint Committee had made clear there were many “unanswered questions” here, he said. It expressed the “gravest of concerns” about possible collusion in the murder arising from various facts, including two suspects identified by the RUC being serving members of the UDR at the time of the murder, he said.

A relative of Mr Ludlow was kidnaped by the British Army the day after his funeral and questioned about the Garda investigation, he added.

The committee also found that relevant security and intelligence files were either missing or incomplete, counsel said. Because no one was able to say why the documents were missing, it suggested a cover-up “up to the highest levels of gardaí and government”.