About 30 squatters have been living on a site in Grangegorman since August 2013. A sudden attempted eviction took place on Monday the 23rd of March. Video: Enda O'Dowd 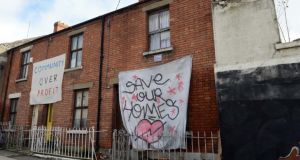 The High Court has adjourned for 24 hours an application by a receiver for an injunction preventing interference with him taking possession of a number of properties in Grangegorman, Dublin.

Receiver Luke Charlton brought the application against “Persons Unknown”, two of whom appeared before the court on Wednesday and said their names were Shane O’Brien and James Sutherland.

Mr O’Brien told the court he was seeking an adjournment so they could get legal advice and also apply for free legal aid. He said they had approached a solicitor who said he was not available to come to court on Wednesday.

Graham O’Doherty, solicitor for the receiver, said his client wished to assert his right of entitlement to the properties and as the “Persons Unknown” were now before the court it was up to them to state their position regardless of legal representation.

While papers had only been served on the defendants on Tuesday, this matter had been going on for a year and a half, the solicitor said.

Mr Justice Paul Gilligan said given papers were only served yesterday, he would put the matter back for 24 hours to enable the defendants seek representation and to file replying affidavits to those put in by the receiver.

Mr O’Brien said it could take up to two weeks to get legal aid. The judge said he could apply for legal aid but the court would be taking the matter up on Thursday.