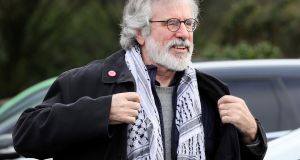 In his action, Gerry Adams says he suffered damage to his reputation as a result of what he says is the false allegation, made by an anonymous source in the programme, that he sanctioned the killing of Donaldson (55) who worked for Sinn Féin in Stormont but also was a spy for M15 for two decades. Photograph: Brian Lawless/PA

Former Sinn Féin leader Gerry Adams wants the High Court to order the BBC to hand over more information he says he requires for a defamation case he is taking against the broadcaster.

He is suing the BBC, claiming it defamed him when it falsely alleged he had sanctioned the killing of former Sinn Féin official Denis Donaldson who worked for decades as a spy for the British.

His action is being brought in the High Court in Dublin over a 2016 BBC Spotlight programme in which the allegation was made.

The BBC denies defamation and says it can provide certain research materials it used in the making of the programme, but says other categories of court discovery sought by him are too broad.

In his action, Mr Adams says he suffered damage to his reputation as a result of what he says is the false allegation, made by an anonymous source in the programme, that he sanctioned the killing of Donaldson (55) who worked for Sinn Féin in Stormont but also was a spy for M15 for two decades.

Donaldson was shot dead at his isolated cottage near Glenties, Co Donegal in April 2006.

The anonymous source, referred to as “Martin” in the programme, said he [Martin] was also was a paid state agent while a member of the IRA.

Thomas Hogan SC, for Mr Adams, said court-ordered discovery of information and particulars held by the BBC is sought because the material provided so far is too vague and inadequate.

Also sought is information about the extent of the broadcast of the programme, as well as the extent of publication of a follow-up BBC website article in which the same allegation was made.

Counsel said that in the Spotlight programme it was said shootings were sanctioned at the top of the republican movement.

It also stated while Mr Adams had stepped aside as a member of the IRA army council by 2006, he continued to be consulted in relation to shootings.

Counsel said the dissident Real IRA three years later claimed responsibility but Martin told Spotlight this was not true and was done to “get more kudos” for the dissidents.

Mr Hogan said the BBC had denied the words used in the programme or article meant Mr Adams sanctioned the murder of Donaldson which was “somewhat extraordinary in the circumstance of the case”.

The BBC claims the programme was put out in good faith and during the course of discussion on a subject of public and vital interest and that it constituted responsible journalism which was the result of careful investigation.

The BBC was willing to give material in relation to research, and materials used in the making of the programme but was not prepared to go beyond that, counsel said.

In order to test whether the programme acted responsibly and whether it should be protected by privilege, his side required to see material which it may have had which could have cast doubt on or contradicted the allegation.

“The defendant has to put all its cards on the table to succeed in this defence,” he said.

Paul Gallagher SC, for the BBC, said much of the material has already been provided. Mr Adams’s side would not be surprised by anything involving allegations about his reputation when the case came to trial.

The case had been “fully particularised in every way required and meets our obligations,” he said.