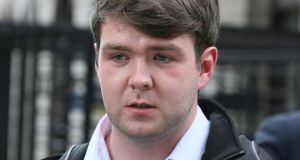 A young gay man has brought a High Court challenge after being told he is permanently deferred from donating blood here after he disclosed having had a sexual encounter with another man six months earlier.

Tomás Heneghan (23), a student from Castlegar, Co Galway, has brought judicial review proceedings arguing he considers blood donation his civic responsibility. The permanent deferral on blood donation imposed on him is discriminatory, disproportionate and contrary to EU law, he argues.

He says he had undergone various tests after having had sex, all of which proved negative, before attending at the Irish Blood Transfusion Service (IBTS) clinic at D’Olier Street in Dublin last May. He was nonetheless informed he was permanently deferred.

That permanent deferral was unreasonable, irrational and disproportionate in the absence of an inquiry into the actual sexual conduct and when the sexual activity in question presented no risk of infection, it is argued.   Mr Heneghan had begun donating blood shortly after turning 18 in 2010 and quite properly disclosed his sexual encounter when he attended to give blood in May 2015, his counsel Michael Lynn SC said.

His consequent permanent deferral breaches his rights under the European Convention on Human Rights and runs counter to a recent decision of the Court of Justice of the EU (CJEU) concerning a similar permanent deferral policy adopted by the French authorities, counsel argued.

Mr Heneghan contends there must be an individual inquiry of each blood donor to ensure there is no discrimination against a person on grounds of sexual orientation, counsel said.

Mr Justice Seamus Noonan said he was satisfied this was an appropriate case for granting leave for judicial review against the IBTS, the Minister for Health and the State. The Irish Human Rights and Equality Commission is a notice party to the proceedings which the judge returned to November.

Mr Lynn said the case arose when his client attended the D’Olier street clinic on May 19th 2015. Because he had not been there for about a year, he was asked to complete the first time blood donor questionnaire. He answered all questions truthfully and, when asked about his answers, had explained he had had sex with a man six months earlier, had undergone tests and all were negative. Testing for various sexually transmitted infections is reliable only after a three month period, counsel added

Mr Heneghan first donated blood three months after his 18th birthday and donated blood over some time as he considered it an act of civic responsibility, counsel said.

His client is now subject to a lifelong prohibition on blood donation because he disclosed quite properly he had had sex with another man,  counsel said. Despite the fact all blood donations are screened for infection and even if a man had sex with another man on just one occasion and that male donor was screened and found to have no infection, the IBTS policy was to impose a permanent deferral, he said.

The taking of blood is regulated by various EC Directives and a recent decision of the CJEU addressed the issues raised in this case, counsel outlined. The CJEU decision concerned the French policy of imposing a permanent deferral on blood donations in the same circumstances as in this case and the CJEU found that is a form of discrimination unless it justifiable for a proper purpose and proportionate to that purpose.

A proper purpose does apply here, to preserve the safety of blood supplies, counsel said. However, for this measure to be proportionate, his case was that inquiries should be made of the individual donor, including about the nature of the sexual act.

Mr Heneghan’s case centred on the absence of such individual inquiry here, counsel said. The permanent deferral is disproportionate in the absence of such inquiry or the proposed donor presenting a high risk of transferring infected blood. There may be situations where a temporary deferral of perhaps a year may be more appropriate and the IBTS imposes such deferrals in other cases, including women engaging in bisexual encounters, he said.