Siege in Gort, Co Galway had Peter Carr in life-threatening situation for 21 hours 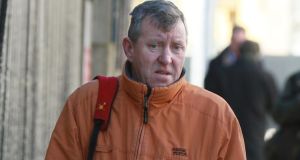 A retired Garda sergeant, who suffered post-traumatic stress disorder after having been involved in the Gort, Co Galway, 21-hour siege eight years ago, has been awarded €50,000 damages in the High Court.

Mr Justice Bernard Barton said during a Garda Compensation hearing that Peter Carr had been in a dangerous and life-threatening situation and it was no surprise that he had suffered psychological injuries.

The court had heard that gardaí received a call from a woman around 11.20pm on October 8th, 2006, stating that shots had been heard at Crowe Street, Gort.

Two Garda cars had been dispatched and it had transpired that a domestic dispute had taken place at No 67, where Anthony Burke had fired shots. His partner and three children had fled to a neighbour’s house.

Carr told the court that Burke, who had two shotguns and around 1,400 cartridges, had been firing round after round from his house, from the front and back doors and an upstairs window.

The court heard that when gardaí, including Carr, who was not armed, attempted to approach the house to make contact with him, Burke had fired at them.

Judge Barton said Sergeant Carr had been concerned about the safety of Mr Burke’s partner, their three children and the neighbour who had taken them in. He had waited for a break in the firing to evacuate the neighbour’s house.

The court was told that Sergeant Carr had managed to place the two women and children in a safe place. Shots had been fired while he was evacuating them and he had feared for their lives.

Judge Barton heard that the Emergency Response Unit, negotiators, a helicopter and dog units had been sent to the scene to deal with the situation.

The siege had lasted until 9pm he next day, October 9th, when Burke had been shot in the shoulder by a member of the gardaí before having been knocked to the ground. Burke had later been arrested while being treated in University Hospital Galway.

Carr said he had developed PTSD symptoms after the incident and had personally tried to deal with it before seeking professional help four years later. He had suffered panic attacks, sleep disturbance and his family life and social life had been disturbed.

Judge Barton, awarding him €50,000 damages, said Carr had probably understated the situation as it was only by the strength of his own character that he had continued to function as a garda until he had made a full recovery following therapy sessions.

The court heard that Burke had later been sentenced at Galway Circuit Criminal Court to five years, with one suspended, in prison after he had been found guilty of possessing firearms in suspicious circumstances.