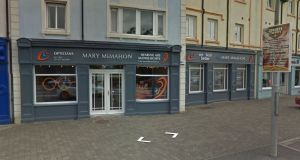 Four men have undertaken not to picket a judge’s home or the Carrick-on-Shannon business premises of his wife (above) this Saturday, October 22nd. File photograph: Google Street View

Four men have undertaken in the High Court not to picket a judge’s home or the business premises of his wife this Saturday, October 22nd.

The undertakings arose after an interim injunction was obtained last week by District Court Judge James Faughnan, and his wife, Mary McMahon, following a call on social media by the Anti Corruption Taskforce group for people to join a protest outside Ms McMahon’s optician’s business in Carrick-on-Shannon, Co Leitrim.

All four appeared before Mr Justice Paul Gilligan on Thursday when the case returned to court and told the judge they were prepared to give undertakings not to take part in any protest.

Mr Doocey and Mr Beattie also said they could not be responsible for what others do.

The judge warned there would be consequences if there were any breaches of the original order by any persons with knowledge of it or by anyone acting on behalf of the four defendants.

The judge addressed his remarks to the four men and a number of people gathered in court for the case.

Mr Granahan said he was prepared to give the undertaking and would not even be in Co Leitrim on Saturday.

Dr Manning said he was not involved in this matter, saying his organisation, Integrity Ireland, was a properly run registered association which had nothing to do with Mr Doocey’s Anti Corruption Taskforce group and merely copied matters of interest on to its own website.

Mr Beattie said he had nothing to do with the matters complained of by the judge and his wife.

Mr Doocey claimed all the allegations contained in affidavits sworn by the judge and his wife to obtain the injunctions were “lies”.

He claimed Mr Faughnan was sending people “in the dead of night” to people’s homes and was one of three district judges Mr Doocey is accusing of corruption.

Mr Justice Paul Gilligan said the order preventing picketing should be placed outside Ms McMahon’s business and the family home.

He gave the defendants two weeks to file replying affidavits and adjourned the matter for four weeks.

As he left the court, Mr Doocey directed comments at Mr Faughnan, who was sitting in the middle of the courtroom, saying he would be seeking his impeachment as a judge, adding: “See you in court, James.”