Ex-garda who feared he would be set alight awarded almost €50,000 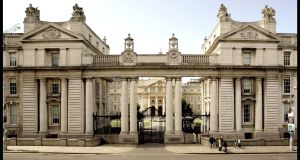 Ex-garda Karl Cummins was on duty outside the Department of the Taoiseach when a man approached him with petrol and a cigarette lighter. File photograph: David Sleator

A retired garda who feared he was going to be doused with petrol and set on fire has been awarded just under €50,000 damages at a Garda compensation hearing in the High Court.

Karl Cummins, now aged 59, told Mr Justice Michael Twomey he had been on security duty at the protection post outside the Department of the Taoiseach in February 2009 when he was approached by a serial protester carrying a container of petrol.

“He kept clicking a cigarette lighter which thankfully did not light for him. It was probably why no one was physically burned in the incident,” Mr Cummins said.

He added that the terrifying incident had led to his developing Post Traumatic Stress Disorder which had changed his life.

Mr Cummins of Alderwood Lawn, Springfield, Tallaght, Dublin 24, said the protester had accused him mistakenly of having been part of a group of gardaí­ who allegedly had beaten him up outside Leinster House.

The man concerned had become very agitated and angry, and shouted expletives at him and other gardaí­.

He told his barrister Brid O’Flaherty that when he smelled petrol fumes and saw the man, his face contorted in rage, threateningly click the lighter and brandish the petrol container close to him he had withdrawn and raised the alarm.

Mr Cummins said this had led to a complete lock down of the Department of the Taoiseach with no member of the Taoiseach’s staff being allowed to enter or leave the building on Dublin’s Merrion Street Upper.

He had caused the Taoiseach’s Department to be alerted to the situation and advised that if then-taoiseach Brian Cowen was on his way to his office he should be warned of the threat and enter the building by another entrance.

Ms O’Flaherty, who appeared for Mr Cummins with Hughes Murphy Solicitors, told Judge Twomey that Mr Cummins had called for back up and gardaí­ and firemen rushed to the scene.

Mr Cummins said firemen had stood by, training hoses on the protester in readiness of any attack until the arrival of Insp John Rice from Pearse Street Garda Station.

Insp Rice, despite being doused with petrol himself, had struggled with the protester and succeeded in “disarming” him.

Mr Cummins told the court he had considered himself to have been in grave danger and feared for his life.

He had expected the petrol to have been thrown over him and then ignited. He did not know if the man intended also throwing petrol over himself and setting himself on fire.

Ms O’Flaherty told Judge Twomey that Mr Cummins developed PTSD and had been off work for months, later retiring from the Garda Síochána. She said there was a conflict in opinion of psychiatrists for both Mr Cummins and the Minister for Public Expenditure and Reform. Neither was being called to give evidence and resolution of the matter was being left for the court to resolve on the basis of their expert medical reports.

Mr Cummins told the court he had developed intrusive recollections of the incident and suffered multiple symptoms including anxiety, sleeplessness and nightmares.

“I became a different man, both argumentative and irritable,” he said.

Mr Cummins told Kevin Dinneen, counsel for the Minister, that he had rarely taken alcohol prior to the incident but had “taken comfort” in it after the event.

Judge Twomey, awarding Mr Cummins damage of €25,000 together with more than €24,000 for expenses and loss of earnings, said he had suffered psychological injuries but had substantially recovered by May 2010.

He had been put in fear of his life and had received psychiatric treatment and counselling.