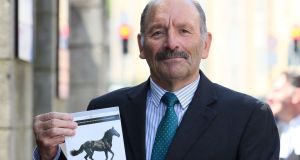 William Jones, with his book, The Black Horse Inside Coolmore, outside the Four Courts on Friday during the opening day of a High Court action taken by him. Photograph: Collins

A former employee at Coolmore Stud has claimed before the High Court the bloodstock “superpower” is trying to suppress sale and distribution of his book about working there.

William Jones is author of The Black Horse Inside Coolmore. He worked at the stud from 2006 until January 2015 and wrote about some of his experiences in his book, self-published last November by his company Gold Rush Publications.

He claims Arthur Cox, solicitors for Coolmore, had written to the Amazon website and various bookshops referring to potential proceedings for defamation in relation to the book, noting it included allegations of bullying and details of the deaths of two horses Mountjeu and Jude.

Mr Jones said the solicitors sought the book be withdrawn from sale and it was withdrawn by a number of distributors.

He claims this amounts to an attempt to frustrate and suppress the book and abuses his right to freedom of speech.

Coolmore denies the claims and contends the book contains allegations that are not true and defamatory.

At the High Court on Friday, Mr Jones, Dominic’s Court, Cashel, Co Tipperary, sought injunctions, pending the full hearing of his action, preventing Coolmore or its representatives threatening bookshops and websites with legal action relating to the book. He also seeks a declaration the book is not defamatory and may be sold in outlets where books are sold.

Mr Jones denies defamation and said he made repeated requests to Arthur Cox to precisely outline the alleged defamation but that had not been done. Instead of bringing defamation proceedings against him, Coolmore were threatening book shops and distributors including Amazon, he said.

The reason defamation proceedings have not been brought was “because I am telling the truth”, he added.

Paul Gallagher SC, for Coolmore, argued there was no basis for the injunctions and his client feared its reputation as a world leader in the bloodstock industry could be damaged if they were granted.

Mr Jones had failed to establish an arguable case and the balance of convenience favoured refusal of the orders sought, counsel said.

Mr Jones “knew well” the nature of the material Coolmore says is defamatory, derogatory and in breach of an agreement entered into between the parties in 2014, counsel said.

Coolmore was “perfectly entitled” in law to contact parties such as Amazon and put them on notice of its position the book contains defamatory material, he added. What distributors and sellers did after that was “up to themselves”.

Mr Jones had also failed to show damages would not be an adequate remedy if the injunctions were refused, he said.

Four others authors say their copyright was breached by Mr Jones’s use of certain material in his book, counsel added.

Mr Jones, he said, had breached a written agreement signed by him in 2014 with his former employer agreeing to compromise a claim brought by him to the Labour Relations Committee. That agreement provided Mr Jones would be paid a year’s salary, cease working at Coolmore and would not disclose records relating to Coolmore’s clients or animals. It also provided the parties would not make derogatory comments about each other.

In reply, Mr Jones said he signed the 2014 agreement under duress after making a bullying claim.

Some of the copyright claims against him were made by persons who have a commercial relationship with Coolmore, he also said. He said he credited one author in his acknowledgements and had tried to contact her about using some material but was unable to do so. Much of what was in his book about famous horses at the stud was already in the public domain, he added.

Reserving judgment, Ms Justice Costello said she hoped to give her decision shortly.