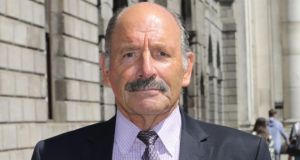 A former Coolmore Stud worker, who authored a controversial book on the business of his former employer after quitting his job there, has lost a High Court defamation claim against the Co Tipperary racehorse breeder.

William Jones’ book, titled The Black Horse Inside Coolmore, was taken off booksellers’ shelves and dropped from commercial websites after solicitors on behalf of the stud wrote to them alleging the book contained damaging and untrue material regarding Coolmore, its clients, customers, owners and staff.

Mr Jones, of Beechmount, Roscrea, Co Tipperary, self-published the book through his company Gold Rush Publications and had failed in earlier High Court proceedings in which he sought to prevent Coolmore from legally “threatening” booksellers and websites who planned to sell the book. He brought his case to the Court of Appeal and lost again.

An earlier court hearing was told that Mr Jones’s book included allegations of bullying and details relating to the deaths of two horses, Mountjeu and Jude.

Mr Justice Senan Allen, throwing out Mr Jones’s bid to take damages from Coolmore for defaming him through the letters its solicitors sent to booksellers, said his High Court claim against the stud was vexatious, frivolous and bound to fail.

Judge Allen said Mr Jones retired from his job of nine years at the stud after bringing a complaint to the Labour Relations Commission arising from his employment. His complaint was settled and he was paid €30,000 as a gesture of appreciation for his service.

As part of that deal he had agreed it would remain strictly private and confidential; that no records relating to animals or clients would be disclosed by him and that he, like Coolmore, would undertake not to make any derogatory comments about each other going forward.

Judge Allen said that in 2015 Coolmore noticed he was writing a book about the stud which had prompted its solicitors, Arthur Cox and Co., writing to remind him of his obligations under the settlement agreement and requesting the manuscript which he refused to give them.

The judge said Coolmore had taken the view the book breached Jones’s obligations of confidentiality; disclosed records of animals and clients; was replete with derogatory comments about Coolmore; was defamatory of it and others and infringed the copyright of a number of authors and publishers.

Judge Allen said Tuesday, in a reserved judgment, that Coolmore feared the book might cause enormous reputational damage and could damage its business and commercial relationships. The letters from its solicitors had invited distributors and retailers of the book to confirm they would not sell it, warning that unless such confirmation was provided Coolmore would hold them liable for any damage suffered by sales of The Black Horse Inside Coolmore through their shops or websites.

Jones protested and in April 2016 unsuccessfully applied to the High Court for injunctions preventing Coolmore from threatening any retailers with legal action and to immediately withdraw all threats made to booksellers, including Amazon. He also failed in getting a declaration from the court that the book was not defamatory. His appeal, too, was lost.

Judge Allen said there was no issue but that Coolmore’s object in writing to distributors was to have the book withdrawn, motivated only to protect the stud’s reputation rather than any desire to cause wanton damage to Mr Jones, whose assertion the letters had been deliberately and maliciously misleading had been based on a misunderstanding of the law and unsupported by the facts he pleaded.

He said that on uncontested facts Mr Jones’s case was bound in law to fail and was therefore frivolous. To the extent that Mr Jones sought to re-litigate previous court decisions and that of the Court of Appeal his application was vexatious.

“His object in bringing these proceedings is to seek to revive and re-litigate issues which have been finally and conclusively decided against him,” Judge Allen said. “To allow it to proceed would be to expose the defendant to the trouble and expense of defending it and would be a waste of court time.”

Coolmore Stud was entitled to succeed in its application to have the proceedings against it dismissed.