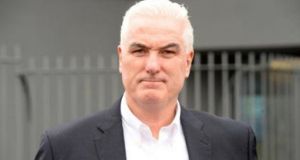 European parliament election candidate for the Dublin constituency Ben Gilroy is challenging a decision by RTÉ not to include him in a televised live debate.

Two candidates in this month’s European parliament elections are seeking High Court orders allowing them to participate in an RTÉ television live debate.

The actions have been brought by two independent candidates Ben Gilroy and Eamonn Murphy, who are running in the Dublin constituency.

Both say they will not be included on a live debate due to be broadcast by RTÉ on May 20th, four days before the ballot.

Both seek various orders and declarations form the court that would allow them to participate in the live debate.

Mr Gilroy initiated his action late last week, whereas Mr Murphy came to court on Tuesday and informed Mr Justice Leonie Reynolds that he wished to make a similar application to Mr Gilroy’s.

At the High Court on Tuesday Niamh Hyland SC for RTÉ, which opposes the two actions, said it is her client’s case that Mr Gilroy’s case was not properly constituted.

Counsel said RTÉ only became aware of the action brought by Mr Murphy, who has also been excluded from the RTÉ live debate, on Tuesday morning.

Counsel said Mr Murphy’s case differed from Mr Gilroy’s as Mr Murphy was also contesting its decision not to show a one minute video that he furnished to RTÉ concerning his campaign.

Videos of a similar length from all the other candidates seeking election to the European Parliament are being shown by RTÉ.

However, Mr Murphy’s video was deemed to be in breach of the Broadcasting Act and the BAI’s code of conduct by RTÉ, which informed him of its decision.

Mr Murphy told the court he intends to challenge that decision by RTÉ.

Ms Justice Reynolds, who noted that an issue in the cases could be that the actions should be brought by way of judicial review, adjourned Mr Gilroy’s case to 2pm on Tuesday when it will be heard by Mr Justice Senan Allen.

As separate issues seemed to be raised in Mr Murphy’s intended action the judge said it should be adjourned until Wednesday.