Peter Sweetman brings case over decision by Minister for Heritage, Culture and the Gaeltach 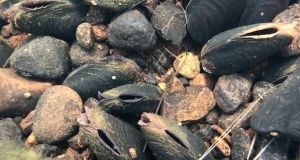 Environmental campaigner Peter Sweetman is challenging a decision to remove protection for the endangered freshwater pearl mussel from part of the River Blackwater.

The High Court heard area of the rare pearl mussel in the main channel of the river through counties Waterford and Cork was subject of a previous order making it a special protection area.

On Monday, Mr Justice Seamus Noonan granted Mr Sweetman’s ex parte application (one side only represented) for leave to bring judicial review proceedings over the decision by the Minister for Heritage, Culture and the Gaeltacht .

Ireland hosts approximately 46 per cent of the EU population of the pearl mussel species and has about 96 individual populations within 139 rivers and in lakes. These populations range in size from hundreds to almost three million.

Mr Sweetman claims the Minister’s decision to change the statutory designation removes special protection from 40 per cent of the area previously covered.

He contends the Minister’s claim that less than one per cent of the pearl mussel population is affected is based on out-of-date scientific evidence.

In an affidavit, Mr Sweetman said the mussels “can’t by themselves take court cases” to ensure their protection, so the only option is for interested members of society to do so.

He has been party to three decisions of the Court of Justice of the EU which, if properly applied by planners and decision makers, should have the effect of enhancing protection for flora, fauna and conserving species for the enjoyment of future generations, he said.

Ecologist Evelyn Moorkens said in another affidavit provided on behalf of Mr Sweetman that she published a paper in 2010 which formed the basis for a National Parks and Wildlife Service conservation strategy in 2011.

She has continued to research since then and says the 2011 strategy should be revisited on the basis of findings between then and 2018.

She said she was surprised to see the Munster Blackwater main channel was selected to be removed from the new freshwater pearl mussel regulations, as it is one of two areas where populations are likely to have more resilience due to flow variation and habitat variety than other areas.

She was also surprised there had been no scientific investigations to back up the changes.

Ms Moorkens said she is one of the few ecologists specialising in the freshwater pearl mussel but she was not contacted by the department about the change and was unaware of any other expert being involved.

There seemed to have been no opportunity to make submissions before the decision was made, she says.

She disputes the Minister’s view the Blackwater has just 0.08 per cent of the mussel population, she added.