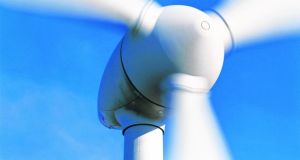 Peter Sweetman claims the purpose of the site investigation is to expand the existing number of wind-generating turbines from the existing seven up to a maximum of 200.

An environmental activist has launched a High Court challenge over the granting of a foreshore licence sought for expansion of an off-shore wind farm.

The Minister for Housing, Local Government and Heritage had last October granted a foreshore licence to carry out site investigation works in an area off the Co Wicklow coast near Arklow.

Peter Sweetman claims the purpose of the site investigation is to expand the existing number of wind-generating turbines from the existing seven up to a maximum of 200.

Mr Sweetman wants various orders and declarations, including orders quashing decisions by both ministers which resulted in the licence being granted.

He claims the disputed decisions are invalid because they contravene provisions of the EU Habitats Directive.

The ministers, he also alleges, failed to publish the making of the decisions or failed to make available for public inspection any determination made in relation to the decisions.

He further claims no reasons have been given for the making of the decisions.

Sure Partners Limited, which sought permission from the respondents to carry out the site inspections, is a notice party to the proceedings.

When the matter came before Mr Justice Charles Meenan on Monday, the judge, having heard submissions from James Devlin SC, with Margaret Heavey BL, instructed by solicitor Brian Harrington, for Mr Sweetman, granted the ex parte application (one side only represented) for permission to bring the challenge.

Mr Devlin said seven turbines had been built under the first phase of this project. While it was not known how many turbines were proposed under the next phase, it had been originally envisaged that up to 200 turbines would be constructed on the off-coast site, he said.

The matter has been returned to March.