‘Enormously important’ court cases not heard due to lack of judges 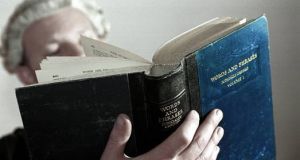 The situation of not having enough judges has become a “recurring theme” and not being able to get cases on for hearing was adding to the stress of parties involved, a High Court judge has said. File photograph: Getty Images

The president of the High Court and another High Court judge have highlighted the effects of the failure to appoint new judges.

The lack of judges means some “enormously important” actions are not getting on for hearing, Mr Justice Seamus Noonan said.

In remarks made separately in different courts on Thursday, the president of the High Court, Mr Justice Peter Kelly and Mr Justice Noonan drew attention to the difficulties in managing High Court lists due to an insufficient number of judges.

Mr Justice Kelly made his comments when asked to allocate what was described as an urgent family law matter to a judge who had made interim orders in that case but has since been assigned to a different court list.

The judge said he could not grant the request and had no additional judges to call upon. The fact judges made interim orders in certain cases did not mean a case had to remain before a particular judge, he said.

Also on Thursday, Mr Justice Noonan, who manages the High Court judicial review and non-jury list, said the failure to fill judicial vacancies means many important cases listed for hearing are not getting on.

He told a packed courtroom that the dozen cases listed before him that day could not proceed because there were “no judges available” to hear “enormously important” and in some instances “life-changing” actions. Some cases also raised issues of important public law.

The situation of not having enough judges has become a “recurring theme” and not being able to get cases on for hearing was adding to the stress of parties involved, he said.

People come to the courts only to be told their action cannot go ahead and cases are then adjourned for up to six months, after which there was still no guarantee of a judge available on the adjourned dates.

Mr Justice Noonan said the reason there were no judges available to hear cases was “simple”. Following a number of retirements, “several judicial vacancies in the superior courts have not been filled”.

Other sitting judges are unable to hear cases because they are heading various commissions of inquiry, he added.

“Justice delayed is also justice denied,” he said. He hoped the situation is dealt with as a matter of urgency.

He expressed regret to parties waiting to have their actions heard and noted many people had travelled long distances only to be told there are no judges available.

In response to the judges’ comments, Minister for Transport, Tourism and Sport Shane Ross indicated that the filling of vacancies in the High Court would have to await the new judicial appointments regime.

“I am looking forward to the rapid appointment of additional judges under the new, non-political, robust and transparent system,” Mr Ross said. “This is due to become law before the summer recess.”

The Judicial Appointments Bill, which it was expected would be brought to Cabinet in January, is now not expected until after Easter, at the earliest.

Any decision on filling vacancies in the court in the meantime will be subject to political discussions involving Mr Ross, according to a Government source.

While there is no Cabinet agreement not to fill judicial vacancies, there is obviously a strong preference on the part of Mr Ross not to do so until legislation is in place for a new judicial appointments system, said the source.

Late last year Mr Ross agreed with Fine Gael that vacancies in the District Court would be filled in return for the accelerating the new appointments law. However publication of the Bill has taken longer than was expected.

“There is a clear preference to appoint judges under the new regime but the requirement of the administration of justice will be taken into account on an ongoing basis,” the source said.

“The vacancies that exist are recent, and don’t need to be filled tomorrow. They will be done in good time, and will require political discussion. Where the Bill is in terms of the road to enactment, will feed into that discussion.”