Dissidents in Derry: PSNI on high alert for republican attacks 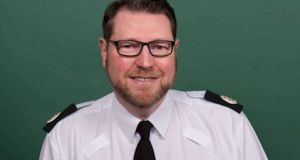 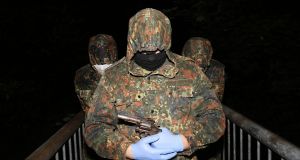 A masked and armed member of the republican dissident group Óglaigh na hÉireann at a show of strength in the Co Derry village of Park. Photograph: Press Eye

Shortly after he joined the Royal Ulster Constabulary (RUC) as an 18-year-old recruit at the Strand Road station in Derry, Stephen Martin marched behind the coffins of three colleagues killed within a month of each other by the IRA.

Detective Inspector Austin Wilson and Detective Sergeant John Bennison had been investigating the killing of the death of Leslie Jarvis – who had been shot in the head by the IRA outside Magee College – when a booby trap bomb exploded, killing them instantly.

A month later, off-duty sergeant Tom Cooke was shot by the IRA as he was getting into his car at his golf club: “I did duty at their funerals, the slow march in front of their remains and behind the police band. It is a memory that will stay with me for the rest of my life.”

That year, 1987, 106 people died in Northern Ireland’s ‘Troubles’ – 16 of them RUC officers. Martin had no qualms about the dangers. The son of a police officer from North Belfast, he joined the police cadets at 16, as soon as he was old enough.

Martin recalls other deaths during his time in Derry – that of another colleague, Clive Graham and, most notorious of all, the killing of Patsy Gillespie, who died along with five soldiers after he was tied into a vehicle and forced to drive it into a British army checkpoint.

“It was a very hostile time for policing,” he says, “yet even then I detected wonderful things about that city”. When Martin returned in 2009 – this time as a member of the Police Service of Northern Ireland (PSNI) and the area’s District Commander, he found Derry “a place transformed”.

Many of the doors previously shut had opened: “People were embracing policing. Even though many people still had maybe their elements of doubt or mistrust you could see that melting away as they went on, I suppose, their own personal journey.”

Within two years, police officers were on bicycle patrols in the Creggan, once part of the “no-go” area of Free Derry: “They were glad to do it, happy to do it. They were pushing the boundaries, demonstrating that they would police that community just as if it was anywhere else.

Today, however, those days are over: “We can’t do that now,” says Martin, who is currently the Assistant Chief Constable leading the PSNI’s crime operations department, which tackles paramilitary groups.

In Derry, the threat lies with dissident republicans. In Creggan – as in many parts of the North – the PSNI travel in armoured Land Rovers or cars, and carry long-barrelled weapons. Strand Road – the only police station on the Derry’s predominantly nationalist west bank – remains heavily fortified.

Martin is based in the PSNI’s headquarters in east Belfast. Inside, plaques cover a wall to commemorate fallen officers killed during the second World War, and later in the Troubles. Poppy wreaths lie below.

Currently, the threat from dissidents is regarded as “severe” – meaning an attack is highly likely. It has been at this level in all of Northern Ireland since 2009, but parts of Belfast, Derry and north Armagh are regarded as being most at risk.

In Derry, the New IRA is “the most significant threat”, with Óglaigh na hÉireann (ONH) and the Irish Republican Movement (IRM) also active. In all, Martin reckons membership at several hundred people in Northern Ireland, spread across the New IRA, Continuity IRA, IRM, ONH and Arm na Poblachta (ANP).

However, the groupings are fluid and change frequently. Some people are involved in passing on information about potential targets. A far smaller number are willing to carry out a shooting, or plant a bomb.

The majority of their leadership is made up of those active in the Provisional IRA or INLA during the Troubles, with some younger members. “Their ambition is not matched by their capability and their capacity,” he says.

Together with MI5, the PSNI is preventing dissident attacks, he insists. The last attack on police in Derry was in February 2017, when a bomb exploded under a police officer’s car. The most recent happened in Belfast last November, when a “rocket-type device” was found in west Belfast.

So far, there have been no attacks this year. However, Martin stresses he is not complacent: “Regrettably, there’s every likelihood that at some point they will carry out further attacks. They seek to murder police officers and prison officers and they will try again.”

For Martin, their ultimate aim is to destabilise society – “to present this place as somewhere that is not normal because normality is something these groups fear”. Inevitably, it is within dissidents’ own communities that much of their impact is felt.

In the Creggan, graffiti urging the young to “join your local INLA unit” implies nothing has changed; the threat “death to dealers” is designed to intimidate, and to exert control, even though often paramilitaries on both sides are involved in drug-dealing.

The “overwhelming” majority of locals in the Creggan and elsewhere do not support the dissidents: “If their desires were actually heard it would be that these criminal groups should go away, that those days are gone,” he says.

Last year, 22 people were shot in paramilitary-style attacks; the last in Derry was in December. The fall-off since is down to PSNI action, but also the “loud voices” of the community, which he views as “critical” in combating dissident republican activity.

“We do see political and community leaders from nationalist and republican communities challenging these people on a regular basis now, and I think it’s a very positive development,” he declared.

Last Easter, during commemorations, youths attacked police Land Rovers with petrol bombs as masked men took part in an illegal parade through the Creggan, but the disorder was widely condemned by community leaders and politicians.

Last month, hoax bombs were left outside the family homes of Catholic police officers in Creggan and other nationalist areas of Derry. Such attacks are a “cynical attempt to intimidate, to bully”, says Martin.

Dissident claims about heavy-handed policing are rejected; while Martin says the video of searches and arrests routinely posted by dissidents on social media actually proves police are acting proportionately and within the law.

“If they weren’t, the officers would be getting into trouble and complaints would be being proven. If you go on the internet you will find many of these videos, and frequently what you hear is the police officers being the subject of abuse,” he adds.

In the background, for now, lies the “uncertainty” of Brexit. Martin takes comfort from the declarations of both Dublin and London that there will be no infrastructure at the Border, he looks forward “to seeing what those arrangements are to ensure that will be the case”.

“Anything that would re-emphasise the Border in a visible or tangible way I think has the potential to be forcibly resisted by dissident republican groups,” he says.

If there were to be any infrastructure on the Border, his view is clear: “I think that would be the subject of threat and the subject of attack.” In the absence of clarity, however, the PSNI has begun to prepare.

The sale of three Border police stations – at Castlederg and Aughnacloy in Co Tyrone and Warrenpoint in Co Down – which had been lying empty, has been temporarily halted. Chief Constable George Hamilton is seeking money to recruit “at least” 300 more officers.

ACC Martin – who is also in charge of preparing the PSNI for Brexit – has concerns about post-Brexit cross-Border crime and security at land, or sea borders, along with worries about European co-operation on extradition and criminal records.

The lack of an administration in Stormont is “unhelpful”, he says, “I think all of us would like to see the devolved institutions functioning again. I think not having a sitting policing board, not having a justice minister, not having an Executive, I think it’s an unhelpful position to be in.”

Now 51, Martin could have retired two years ago, but decided against it: “I still think I’m making a contribution to policing and to society. Responsibility is really important to me,” he explains, adding that policing must offer hope.

He sees the “police officers in the yellow coats”, out on foot patrol in areas like Creggan, as “critically important” and a vital counter to the instability and fear dissident republicans would seek to engender.

“Behind every uniform or behind every one of those armoured cars are people, human beings with their own wives or husbands, sons or daughters, mums or dads, their mortgages, their own stresses and strains.

“That’s the humanity of policing.”