Director of Public Prosecutions challenged for not explaining decision 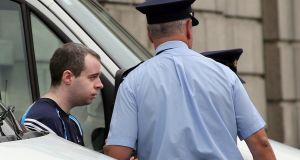 Eric Eoin Marques at the Four Courts for a High Court hearing in 2013. Mr Marques is wanted in the US to face charges relating to child pornography. Photograph: Paddy Cummins/PCPhoto.ie

Eric Eoin Marques, who is alleged to be the owner and administrator of an anonymous hosting site known as Freedom Hosting, is wanted by the US authorities to face charges relating to conspiring to distribute and advertise child pornography and advertising and distributing child pornography.

Mr Marques (30), Mountjoy Square, Dublin, has been in custody since his arrest in August 2013. His surrender was ordered by the High Court last December but this was stayed pending an appeal. Mr Marques is also appealing an unsuccessful judicial review of the DPP’s decision not to prosecute him in Ireland where, his lawyers have submitted, there is a strong public interest in doing so.

Micheál P O’Higgins SC, for Mr Marques, told the Court of Appeal that it had two substantive issues to consider in the judicial review proceedings.

These were whether the DPP still enjoyed a “quasi-immunity” from giving reasons for prosecutorial decisions and whether there were exceptional circumstances present in his client’s case to ground the giving of reasons.

Patrick McGrath SC, for the DPP, said the High Court’s judgment dismissing Mr Marques’s judicial review application was “unimpeachable” and “should be upheld”.

During Mr Marques’s judicial review appeal on Thursday, Michael Lynn SC, for the commission, submitted that in any state based on the rule of law, public bodies must give reasons for the decisions they made or, alternatively, if it was in the public interest not to give reasons, they must state why.

Mr Lynn, whose side are not party to the dispute but have a strong interest in the matter, said reasons should be given even if the applicant had no entitlement to what he sought.

He said the commission was not challenging “in any way” the special position of the DPP but it could not have a “blanket policy” of not giving reasons without stating why in individual cases. As a general proposition, it was in the public interest to know how the DPP understood and applied “its understanding of the public interest,” Mr Lynn said. There was a wider principle in terms of transparency.

Mr Justice Michael Peart, who sat with Mr Justice George Birmingham and Mr Justice Garrett Sheehan, said the court would reserve its decision on both Mr Marques’s judicial review appeal and his appeal against an extradition order. The commission’s role was impartial in both matters.