Debt cases to be removed from Master of the High Court 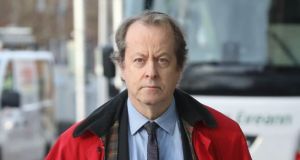 The Master of the High Court has been a consistent critic of various banks and funds in their bids to secure judgment against debtors and in early 2018. Photograph: Collins Courts

Master Edmund Honohan currently deals with up to 200 cases a week involving claims over debts.

The practice direction signed by Mr Justice Peter Kelly, the president of the High Court, will remove all debt cases from the Master and they will instead be directly assigned to a High Court judge.

Master Honohan also previously dealt with discovery issues in High Court cases but no longer does so following an earlier direction by a former High Court President, Nicholas Kearns.

The Master has been a consistent critic of various banks and funds in their bids to secure judgment against debtors and in early 2018 said he had drawn up a bill to assist those facing repossession. Such people are before his court on a daily basis, he said.

In early 2018, he described as a “sick joke” advice given by Taoiseach Leo Varadkar to those wanting to get a mortgage-to-rent solution. Mr Varadkar had advised that people should avail of the Abhaile service but Mr Honohan said the service was “merely a voucher for €200 worth of legal advice before you go to the Circuit Court”.

The Master most recently came to public attention after breaking windows in his courtroom in December to clear what he described as a “fug” there.

The existing system for dealing with claims for final judgement for a pure money debt involves a summary summons being issued in the High Court central office. If the debtor seeks to defend that, they enter an appearance. The claimant then proceeds to apply for judgment and that application then comes before the Master who has powers to deal with it himself or send it to the High Court to be dealt with.

As a result of the practice direction, the Master’s workload will be substantially reduced but he will continue to deal with a range of pre-trial applications in High Court proceedings.

Those include dealing with summonses for possession orders to ensure those are ready to proceed to hearing before the High Court.

Other pre-trial matters will include dealing with applications to join additional parties to proceedings and applications to strike out defences for failure to make discovery of documents.

Speaking to The Irish Times, Mr Honohan said he was “flattered” by the move.

“Actually, I’m flattered by it. It shows I am doing my job,” he said. He declined to make any further comment.

Meanwhile, a spokeswoman for Minister for Justice Charlie Flanagan said the organisation and scheduling of cases “is entirely a matter for the President of the High Court”.

Debt campaigner David Hall said the decision was a bad day for debtors.

“Those in debt have had few effective people to help them and treat them with compassion and protect their dignity while being pursued by well represented banks,” he said.

Mr Honohan has been one of the few officials who has spoken the truth about banks’ behaviour and has tried to help those crippled with debt, he added.