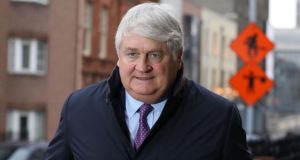 Denis O’Brien had 28 days to lodge an appeal, a period that expired on Monday. File image: Collins Courts

The deadline for businessman Denis O’Brien to appeal the High Court jury’s rejection of his recent defamation case against the Sunday Business Post has passed.

On March 1st, the jury found in favour of the newspaper and two of its journalists, former editor Ian Keogh and former deputy editor Tom Lyons. Mr O’Brien claimed that they and the paper had defamed him, and had acted with malice.

His claim concerned several articles published over six pages in the newspaper of March 15th 2015 in which Mr O’Brien was named as amongst the 22 biggest borrowers from Irish banks in 2008 in a report drawn up by PwC.

The newspaper denied this and the journalists rejected his arguments trenchantly over several days in the witness box.

The jury’s decision was perfected – that is, given legal effect by Mr Justice Bernard Barton – on March 4th. Costs were awarded against Mr O’Brien which at the time, legal observers estimated to be likely over €1 million.

Mr O’Brien had 28 days to lodge an appeal, a period that expired on Monday. No notice of appeal is listed on the courts service website and legal sources close to the case said they were unaware of any such notice having been issued.

Mr O’Brien’s spokesman did not respond to queries from The Irish Times.