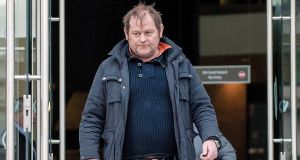 A sister-in-law of convicted criminal Cyril McGuinness, who died last month after a police raid in the UK, has gone to the High Court to seek the return of two mobile phones confiscated by gardaí.

Following his death, Barbara Sloan was travelling to the UK with his widow Mary McGuinness to see undertakers when they were taken off a flight at Dublin Airport.

She claims they were held by garda detectives for two hours and two mobile phones were seized.

Ms Sloan, The Green, Seatown Park, Swords, Co Dublin, is seeking orders for the return of the two smartphones.

Cyril McGuinness (54), a convicted criminal was considered a key suspect in the kidnapping and torture of Quinn Industrial Holdings (QIH) director Kevin Lunney.

He died shortly after his arrest from a suspected “cardiac event” in Derbyshire last month.

The Derbyshire police raid was part of a co-ordinated series of search operations, mainly focused on the Border area, linked to the brutal attack on Mr Lunney in September.

Mr Lunney (50) was abducted outside his home near Derrylin, Co Fermanagh, and taken to a horsebox across the Border, where he was savagely beaten.

In the High Court on Monday, Ms Justice Leonie Reynolds was told Ms Sloan travels extensively, the phones contain business details and she is seeking their immediate return.

Ms Justice Reynolds, who noted the phones were taken in November, said she will deal with the application on Thursday.

In an affidavit, Ms Sloan said Mrs McGuinness had asked her to accompany her to Buxton, Derbyshire, to meet the undertakers following the death of Cyril McGuinness.

She said they had boarded a flight to Manchester when they were approached by detectives and taken off the flight.

She said her luggage was also searched and the two women were later told the phones were being confiscated.

She said they had to purchase tickets for another flight later that evening and arrived in the UK when it was too late to attend the undertakers.

She said her phones contained private and business related matter and she had sought their return through a letter from her solicitors last week.

A UK inquest has heard that Cyril McGuinness, known as “Dublin Jimmy”, was seen to smoke three cigarettes and drink a cup of tea while sitting on a sofa following his arrest at around 7am in the Buxton area of Derbyshire on November 8th last.

Chesterfield Coroner’s Court was told McGuinness “already had a diseased heart” and collapsed 60-90 minutes after his arrest and was pronounced dead at around 10am.

Giving evidence at the inquest, Detective Sergeant Steve Simmons said the death was automatically referred to the Independent Office for Police Conduct (IOPC).

Outlining the events leading up to his death, Det Sgt Simmons said: “The circumstances are that Derbyshire Police attended an address in Buxton at the request of the Police Service of Northern Ireland. Mr McGuinness was arrested at about 7am, was placed in handcuffs, and approximately an hour to an hour-and-a-half later, he collapsed.”

The inquest has been adjourned until the conclusion of the IOPC investigation.