Man who was not wearing a helmet, suffered truamatic brain injury 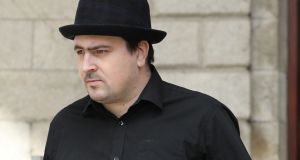 Alexandru Doroscan leaving the Four Courts yesterday. He had amnesia for four months after the incident and only knew he was in a crash because he had been told what happened. Photograph: Collins

A cyclist who suffered a traumatic brain injury when he was thrown into the air after being hit by a van has settled his High Court action for €3 million.

Alexandru Doroscan (33), a father of one and a waiter, was cycling at a junction in Blanchardstown, Dublin, when he was knocked down by a van, the High Court was told.

Mr Doroscan, who was not wearing a hemlet, suffered a truamatic brain injury and other injuries. He had amnesia for four months after the incident and only knew he was in a crash because he had been told what happened.

The incident occurred at a junction of the Ongar Distributor Road and Shelerin Road, Blanchardstown, on August 2nd, 2013.

Mr Justice Kevin Cross was told Mr Meade was uninsured and unlicensed at the time.

Failure to apply the brakes

It was further claimed there was failure to apply the brakes either adeqately or at all and to keep any or any adequate lookout.

In November 2015, Mr Meade was jailed for a year after he pleaded guilty before Dublin Circuit Criminal Court to dangerous driving causing serious harm, failing to stop after a traffic incident, driving without a licence and driving without insurance at the Ongar Distribution Road, Blanchardstown, on August 2nd 2013.

At that hearing, the court heard from a garda that one witness said the cyclist was thrown up to three metres in the air. A forensic collision analysis stated the cyclist was hit at 57km/h.

Prosecution counsel read a statement from Mr Doroscan in which he said he would be be dead were it not for God and the doctors but his life and future had been destroyed.

In the High Court on Tuesday, his counsel, Michael Byrne SC, told the judge that liability in the case was conceded.

The settlement also took into account Mr Doroscan was not wearing a cycle helmet, counsel said.

While a helmet was not legally required, that issue had to be taken in to account in the assessment of the case and would account for about 20 per cent contributory negligence on the part of Mr Doroscan.

After the incident, Mr Doroscan was taken to hospital and later transferred to Beaumont Hosptial where he underwent a decompressive craniotomy and spent a long time in intensive care, counsel said.

In August 2014, Mr Doroscan was transferred to the National Rehabiliation Hospital and was diagnosed as suffering froma traumatic brain injury.

Mr Doroscan has “mercifully” done exceptionally well since with the support of his wife and extended family, Mr Byrne said. “It has been a very difficult time for the family. Mr Doroscan has signficant deficits.”

Approving the setlement, Mr Justice Cross said it was a dreadful incident and he wished Mr Doroscan and his family well for the future.

Coronavirus: Ban on household visits credited with slowing spread 03:48
Fears that further cancellation of Tidy Towns will see it ‘lost forever’ 02:04
‘Public health doctors are at the frontline,’ says Dr Ina Kelly 01:39
Public health doctors set to ballot for strike action over pay and contracts 01:37
Most face masks to protect against coronavirus do not meet standards 01:20