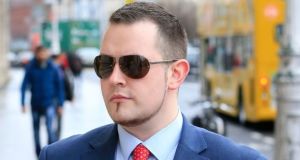 The High Court has ordered the extradition to the United States of a Wicklow man alleged to have been an administrator of the Silk Road website that dealt with illegal drugs and hacking software.

Mr Justice Paul McDermott in a detailed judgment on Friday ruled that Mr Davis be surrendered to the United States.

The judge rejected all grounds of Mr Davis’s opposition to the request.

It is expected that Mr Davis, who was present in court, will appeal the decision.

Lawyers for the State argued that Mr Davis should be surrendered to the US. Mr Davis who claims he suffers from both a form of autism known as Asperger’s Syndrome and depression had opposed the request.

Among his points of objection he says that if extradited he will be detained in a inhuman and degrading manner.

If convicted in the US Mr Davis could receive a life sentence.

Mr Davis also claimed the formal request seeking his surrender is flawed, lacks clarity and the details of the charges against him are vague. It was also argued that Mr Davis should have been charged with corresponding offences he is accused of by the US in Ireland.

During the hearing the United Nations Special Rapporteur on Torture Professor Juan Mendez expressed his concerns about conditions at the facility in New York City, the Metropolitan Correctional Centre (MCC), where Mr Davis is likely to be held if he is extradited to the US.

During the hearing Mr Davis’s lawyers argued that Prof Mendez had raised issues about the negative effects on Mr Davis’s mental health if he were to be held in isolation at a special housing unit within the MCC. The State rejected all points raised by Mr Davis.

Lawyers for the Attorney General said there was no evidence that Mr Davis would be held in the special housing unit at the MCC because he is not from the US.

Counsel added that assurances have been Mr Davis’s condition would be monitored while detained should he be extradited.

The Silk Road, which was shut down by the Federal Bureau of Investigation in 2013, was an underground website that hosted a “sprawling black market bazaar” on the internet.

Mr Davis is accused of acting as a site administrator on the Silk Road website using the name ‘Libertas’.

The Silk Road website was launched in 2011 and was shut down in October 2013.

It was created and run by American Ross William Ulbricht. under the pseudonym ‘Dread Pirate Roberts’ (DPR). He was arrested in 2013 and charged with money laundering, trafficking drugs and hacking offences. He was subsequently sentenced to life imprisonment. The site offered anonymity to its users, where trades were conducted in the on-line currency bitcoins.

The US authorities claim between June 2013 and October 2013 Mr Davis was a site administrator of the Silk Road website and had an “explicit knowledge of the items for sale on the website”.

The drugs available on the site included heroin, LSD, cocaine and amphetamines.

It is claimed as part of his role Davis dealt with queries from the sites users, and he re-organised certain items that could be purchased on the website into different categories.