Couple moved back into repossessed boarded-up home after it was vandalised, court told 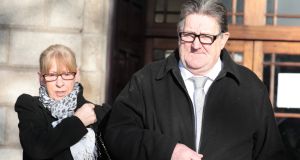 Esther and Joseph Carragher at the Four Courts for a High Court action in relation to the repossession of a property at Doolargy Avenue, Muirheavnamor, Dundalk, Co Louth. Photograph: Collins Courts

A couple aged in their 60s moved back into their home and repaired it after it was vandalised following a repossession order, the High Court has been told.

Joseph and Esther Carragher had been sleeping on the floor of their daughter’s house after being evicted for mortgage arrears on their home at Doolargy Avenue, Muirheavnamor, Dundalk, Co Louth, when they decided to move back into their home of 35 years, the court heard.

On Wednesday, they were given until next month to come to an arrangement whereby they can keep their home under a Government mortgage-to-rent scheme to assist distressed borrowers.

In 2017, Start Mortgages, which was owed some €80,000, got a possession order against them in the Circuit Court.

Last September, the sheriff executed the order and the house was boarded up.

Some time later, according to their solicitor Catherine Allison, vandals broke in to the house and smashed it up.

She said the Carraghers, “having had an affinity with what was their family home for 35 years”, decided to carry out repairs and moved back in.

Start Mortgages then applied to the High Court for an injunction preventing them trespassing.

Under that, Start would still get its money whereby the Carraghers could avail of the mortgage-to-rent scheme, she said. This essentially makes the occupiers tenants with a right to buy back after a number of years.

The house is worth about €100,000, the Carraghers have no other substantial debts and were not in substantial negative equity, Ms Allison said.

Ms Carragher is working and they are able to pay €500 a month but had not made any payments since 2016.

Ms Allison said the couple had not engaged when the letters leading to the repossession order arrived. They were not unlike many others, including teachers and other professionals, who put their “heads in the sand” in these situations, she said.

The Carraghers went to the Circuit Court when the possession order was granted but did not understand what was going on, she said.

Ms Allison said they were not aware of the Abhaile scheme and when they came to her for assistance she gave them a letter to give to the High Court when Start made its trespass injunction application, but they again did not understand what was going on.

Ms Allison said she came to court on Wednesday on a pro bono (free of charge) basis until an application for legal aid could be dealt with.

Ms Justice Reynolds asked Rudi Neuman Shanahan BL, for Start, what he had to say to Ms Allison’s assertion that Start’s primary concern was to get its money. Mr Neuman replied: “Our primary concern is that court orders are not set at nought.”

It is more than three years since Start received any money from the Carraghers and now certain allegations were being made at “the 11th or 12th hour” when Start was forced to come to court to tell the couple they are not allowed back in the house, he said.

The judge put the matter back to January but ordered the couple, as they were seeking “further indulgence” of the courts, to make two €500 payments and return to court on the adjourned date with “the necessary lump sum.”

The court was most anxious the matter be expedited at this stage and Ms Allison should keep Start informed in relation to their application under the Abhaile mortgage to rent application, she said.

“They may have buried their heads in the sand but that has to come at a price at this stage,” the judge said.