Copyright case against One Direction struck out at High Court 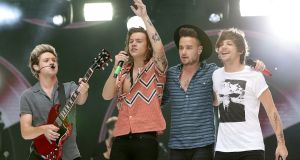 A singer-songwriter’s action against all five original members of boy band One Direction and others over alleged copyright infringement has been struck out on consent at the High Court.

David Lewis Smith had claimed the One Direction release Night Changes infringes his musical work and he sought various reliefs including damages.

The song Night Changes was released by One Direction in 2014 and featured on their fourth studio album Four.

The claim, which was denied, was against the four current members of the band Niall Horan, Harry Styles, Liam Payne and Louis Tomlinson, and also against Zayn Malik who left One Direction in 2015. The claim was also against parties including UK songwriter Jamie Scott and US songwriters Julian Bunetta and John Ryan who wrote and produced Night Changes.

The other defendants were Simco, the production company behind The X Factor; Big Deal Music, a publishing company that in 2013, Mr Ryan allegedly signed a contract with; Universal Music Publishing; EMI Music Publishing and Sony Music Entertainment UK Ltd.

The case was briefly mentioned before the High Court on Thursday when Ms Justice Leonie Reynolds was due to fix a date for the hearing of a pretrial discovery motion brought by lawyers for Mr Lewis Smith.

The judge was told that hearing date was not required and, with the consent of all the parties, the entire proceedings could be struck out.

Pubs not to reopen and restrictions to remain on all gatherings , Cabinet decides 18:46
Court approves €35,000 payment to family of infant who died hours after birth 18:36
Former TV presenter dies after car enters water in Co Down 18:02
Ireland needs to move to ‘zero-Covid’ policy to avoid catastrophe, scientists say 17:48
Coronavirus: 45 new cases but no further deaths reported in the State 17:46